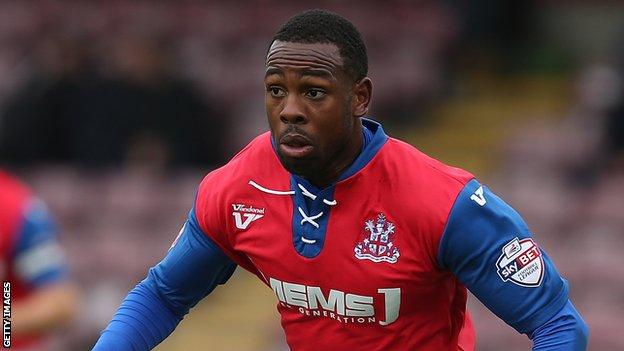 Gillingham forward Myles Weston says a full week of training will give interim manager Peter Taylor the time to put his ideas across to the squad.

The Gills have lost two of their three matches under Taylor, who took charge at the Priestfield on October 14.

Weston told BBC Radio Kent: "It is hard to come in as a new manager and not do proper preparation if you only have a couple of days with a new team.

"It is not going to happen straight away. We need to work at things."

The 25-year-old added: "We haven't had a proper week with him yet so we have only done a couple of bits.

We are all up for learning and we need to get used to his style. It's about practise and everyone is up for that

"Hopefully this week coming the gaffer can do what he wants to do before the Carlisle game."

Taylor faced three League One matches in the space of eight days after returning to the Kent club two weeks ago following the sacking of Martin Allen.

He lost his first match in interim charge 2-1 at home to Preston, guided the Gills to a 2-1 victory over Notts County and then saw his side lose 2-1 at Port Vale on Saturday.

The 60-year-old has called for his side to be organised defensively whilst also showing attacking flair where possible.

Weston, who has made 16 appearances this season, believes their performances are improving despite their mixed results so far.

"We have adapted well and are getting used to the formation and the way the new gaffer wants to do things.

"Even though we lost [at Port Vale] I feel there were a lot of good things, good play and good things we did as a team.

"We are all up for learning and we need to get used to his style. It's about practice and everyone is up for that."