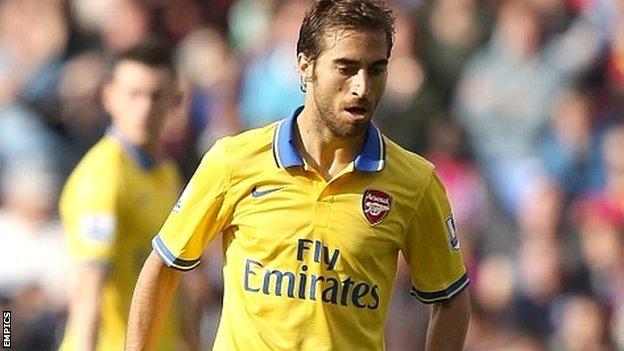 Arsenal midfielder Mathieu Flamini is set to be out for two to three weeks with a groin injury he suffered in Saturday's 2-0 win at Crystal Palace.

The 29-year-old will miss Tuesday's League Cup tie against Chelsea and Saturday's match against Liverpool.

He is also likely to be out for the Champions League game against Borussia Dortmund on 6 November and the trip to Manchester United four days later.

Flamini has been a key player since returning to the club in August.

The France international has been praised for his performances this season after moving from AC Milan on a free transfer with the Gunners yet to lose a game when he has played.

Arsene Wenger's side are top of the Premier League table after nine games but apart from a 1-0 victory over Tottenham, are yet to meet another Premier League side from last season's top seven, so losing Flamini at such a key point will test their midfield resources.

Mikel Arteta, who was sent off at Crystal Palace, will miss the game against Chelsea through suspension but will be available for the match against Liverpool.

The Gunners are also top of their Champions League group.

At the halfway stage, they are equal on points with Borussia Dortmund, who they lost 2-1 to at home earlier this month, and Napoli, who they have beaten.