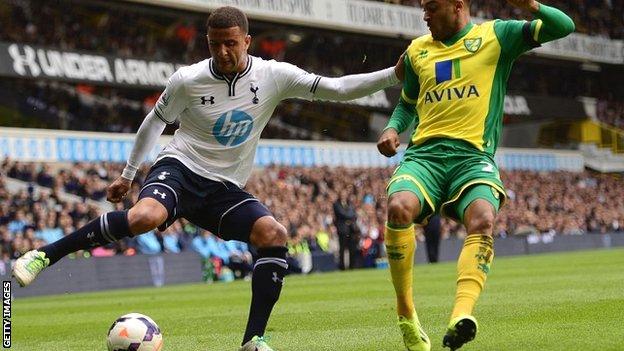 Tottenham and England full-back Kyle Walker has signed a new contract to keep him at White Hart Lane until 2019.

The 23-year-old joined Spurs with fellow full-back Kyle Naughton from Sheffield United for a combined fee of £9m in July 2009.

He had a season back at Bramall Lane, and was also loaned to QPR and Aston Villa before establishing himself in the Tottenham team during 2011-12.

Walker has made 112 appearances for Spurs and has nine England caps.

Walker is a key component of a Spurs side seeking a return to the Champions League, having been denied a place last season despite finishing fourth in 2011-12, because Chelsea won the tournament.

"When I first signed here at the age of 18, I always wanted to make it a long stay," he said.

"The lads are fantastic as well as the manager and everyone surrounding the club - it just makes it a lot easier when they do offer you a contract to sign it.

"I'm very thankful to the chairman [Daniel Levy] for giving me an extension on the contract and hopefully I can repay him by putting the performances in on the pitch and getting that top four spot."