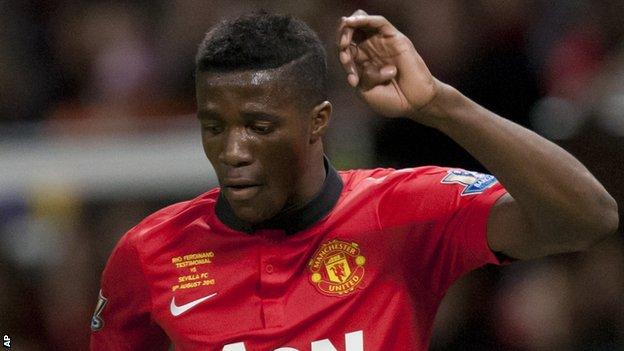 After joining for £15m in January, Zaha was loaned back to Crystal Palace and has not featured in the Premier League for United this season.

"We have to try to make sure he gets some playing time," Moyes told the United club website.

"Unfortunately, we haven't done that with Wilf and, if it's still the case in January, we would look at it."

Dave Webb, the scout who discovered Zaha playing parks football in south London at the age of 13, has urged United to send him out on loan.

Moyes said: "I told him we would try to get him minutes but in the wide areas we have Nani, Antonio Valencia, Ashley Young, Adnan Januzaj and even Shinji Kagawa.

"We are as strong there as anywhere. It's not that Wilf has done anything wrong; it's just that we have big competition.

"He is very much in my plans and in my thoughts all the time. We don't want to put him in too quickly.

"I've said I would look at it in January as I wanted to have him here for six months to see how we work."

Moyes added that Zaha is in contention for a starting place in Tuesday's League Cup clash with Norwich City.