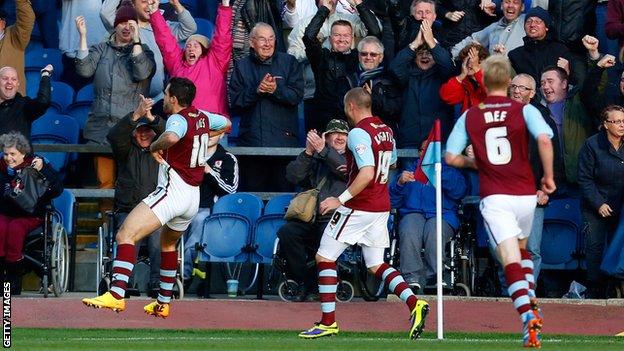 Ings, 21, scored both goals in the 2-0 victory at Turf Moor, which leaves the Clarets with a three-point lead at the top of the Championship.

"People might be thinking we've had some luck with our form but we've gone out and battered teams," Ings told BBC Radio Lancashire.

"In this league it's all about consistency and we're showing that."

The Championship's most lethal strike partnership

Burnley have been top of the table since the start of October and have now won seven league games in a row.

His brace against QPR took Ings' tally up to 13 for the season, as he has gone about replacing Charlie Austin, who moved to Loftus Road following his 28-goal haul during the last campaign.

"I'm just enjoying my football as I've not had a good couple of years through injuries," added Ings, whose recent form saw him win an England U21 cap.

"Now that I'm fit I'm going out with a smile on my face and it's really effective.

"I can't sit on 13 now and get complacent. I work hard in training every day to hopefully better myself as a player and hopefully the goals keep coming."

Manager Sean Dyche has previously spoken about the confidence he has in his side to cope with the pressure of being the league leaders, and says the way they performed on Saturday only reinforced that.

"It was a big test with QPR coming to town and I thought we were fantastic," said Dyche.

"I thought the energy, the discipline, application and some of the quality was excellent.

"It takes a team ethic to play against any team, but certainly when you're playing the fancied teams of the division."