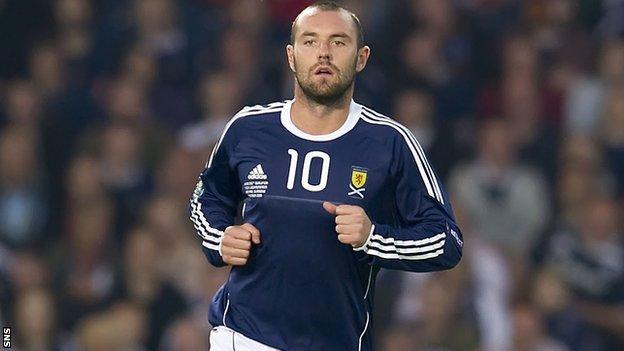 Scotland manager Gordon Strachan has told in-form Kris Boyd to "keep going" in his pursuit of an international recall, according to the Kilmarnock striker.

Boyd, who last featured for Scotland against Lichtenstein in 2010, has scored six Premiership goals this season.

"I want to get back in a Scotland jersey," Boyd told BBC Sportsound.

"I had a 10-minute chat with Gordon and he said 'just keep going'."

The striker has scored seven goals in 18 appearances for Scotland and is determined to add to that haul after a three-year wait.

With friendlies against the United States and Norway next month, Boyd aims to catch the attention of the man who bought him while in charge at Middlesbrough.

"At the end of the day I don't need to prove to Gordon Strachan what I can do," the striker said.

"It's a matter of getting my fitness up to be able to play at that level. You never lose what you've got; you only lose fitness.

"I'm still the same finisher I was five or six years ago and I might have added some things to my game that have helped me get into better positions.

"The biggest thing for a footballer is his fitness to get about the pitch."

Boyd fired a double in the 2-0 win at home to Hearts at the weekend, leading to Killie boss Allan Johnston suggesting the predatory marksman deserves a call-up.

"I want to get myself back in a Scotland jersey and I've always said that," Boyd continued.

"It's a drive and determination to get myself back because there's nothing better than walking out at Hampden to represent your country in front of 50,000 fans.

"You're scoring goals and I've always said I want to get back into the Scotland set-up but I know myself that I'm maybe a couple of games short.

"It's okay doing it at Kilmarnock but I want to do so on a regular basis for nine or 10 weeks and then you know you're back to a level where you can put up a case to represent your country again.

"If the call comes I'll be more than delighted.

"But, as I said at the weekend, I don't want to (be called up) because of a few call offs or because it's a friendly; I want to be called up because I've earned it on merit by scoring goals week in week out.

"We'll wait and see what happens."