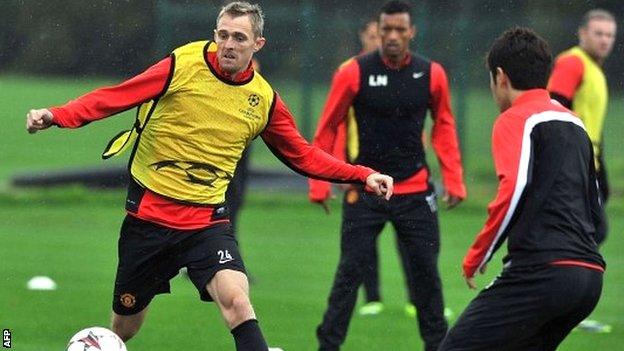 Manchester United midfielder Darren Fletcher made his competitive return on Monday, playing 67 minutes of a 2-2 under-21 draw against Fulham.

The 29-year-old was diagnosed with ulcerative colitis, an inflammatory bowel condition, in December 2011.

He has played only 13 matches since and has not featured in the first team since Boxing Day 2012.

The support from the club has been fantastic - from Sir Alex Ferguson to the new manager and David Gill. Everyone at the club

"I've been training for a few weeks and the next progression is some match time. I enjoyed it," Fletcher said.

Fletcher had to take an extended break from the game after first being diagnosed with the chronic condition and it flared up again 12 months later.

He had surgery in January and was ruled out for the remainder of the 2012-13 campaign.

"It's been tough," he admitted. "Luckily, I've got a great family around me - my wife, children, mum, dad and sisters. It's a great family and, if it was not for them, I wouldn't be standing here today.

"They keep me going, keep me motivated and lift me when I'm down. All these factors contributed to me standing here today on the road to recovery."

"He's worked closely with me, getting myself right and back, and the support from the club has been fantastic - from Sir Alex Ferguson to the new manager [David Moyes] and David Gill. Everyone at the club. I couldn't ask for anything better."

Asked about his return at the AJ Bell Stadium in Salford, he added: "The plan was to get to half-time and see how I felt - then get to 60 minutes and take it from there.

"Although I felt I could have gone on a bit longer, the plan was not to play more than that, so I'm better sticking to the plan and not upsetting the sports science lads."