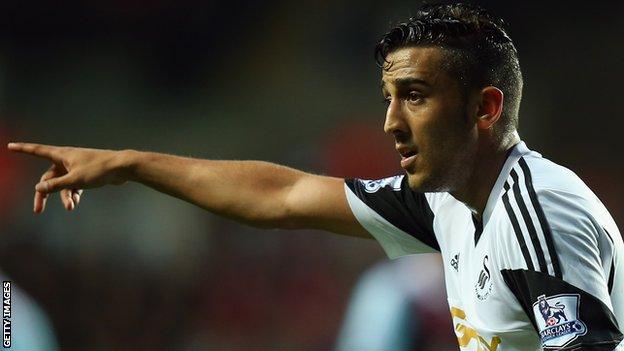 Taylor's only previous south Wales derby was Swansea's 1-0 win at Cardiff in the Championship in November 2010.

"This is what you play football for, to play in these sort of games," said left-back Taylor.

"It can be daunting but we as professionals, obviously playing at the highest level, need to be able to deal with that.

When it comes to a derby it wouldn't matter if we were top and they were bottom or the other way round, it just comes down to on the day who produces.

"As soon as you step across that white line on Sunday and hear the crowd you know it's a different type of game.

"We watched the Sunderland-Newcastle game on Sunday before the West Ham game.

"I think it will probably be quite similar this Sunday."

Swansea are now in their third season in the Premier League after securing promotion following a play-off final win over Reading at the end of the 2010-11 season.

The Swans won 1-0 at Cardiff that season thanks to a Marvin Emnes goal but the Bluebirds secured victory at the Liberty Stadium with Craig Bellamy scoring the only goal of the game.

Cardiff secured a return to English football's top flight after a 51-year absence when they won last season's Championship title.

The Bluebirds are 16th in the Premier League - two points behind ninth-placed Swansea.

Taylor acknowledges the progress Cardiff have made since Malky Mackay was appointed manager in the summer of 2011.

"Malky Mackay sets his teams up really, really well and I think he's quite an impressive manager," added Taylor.

"His teams work really, really hard that's for sure. Cardiff will think they've had a good start so far.

"But when it comes to a derby it wouldn't matter if we were top and they were bottom or the other way round, it just comes down to on the day who produces.

"The two [games] we played in the Championship [during the 2010-11 season], it was just two bits of quality that settled two games.

"It's little bits of individual quality that might just settle it."

Taylor, who joined Swansea from Wrexham in 2010, believes Cardiff's inclusion in the Premier League is good for Welsh football.

"The first thing I said was if Cardiff bring through more youngsters this is more Welsh players playing in the Premier League.

"But also it's so exciting to have these derby games. It was definitely the first fixture the players looked for."