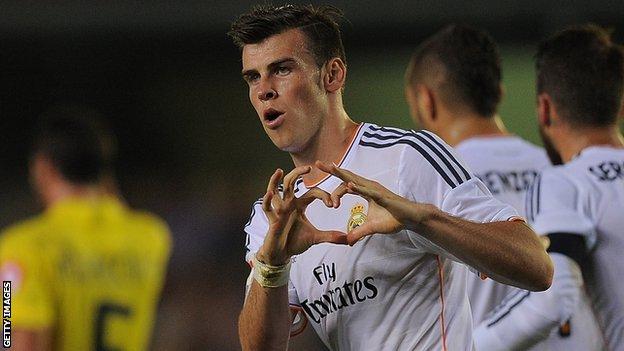 Wales forward Bale, 24, scored 26 goals for Tottenham last season before an £85m move to Real Madrid in the summer.

Barcelona's Lionel Messi will be looking to retain the award he has won for four years running.

Messi's club team-mates Andres Iniesta, Neymar - who moved to the Nou Camp from Santos in the summer - and Xavi also make the shortlist, as does Cristiano Ronaldo of Real Madrid.

Manchester United striker Wayne Rooney made the shortlist last year but has failed to do so this time, with no player from England, Scotland or Northern Ireland represented in the final 23.

Bayern Munich beat Barcelona on the way to winning the Champions League last season and they have six players up for the award.

The 23-man list will be whittled down to three in December before the winners will be announced on 13 January, 2014 in Zurich.

In terms of countries, Germany have the most players nominated with five, while Brazil, Netherlands, Spain and Uruguay have two apiece.

Argentina, Belgium, Colombia, France, Italy, Ivory Coast, Poland, Portugal, Sweden and Wales each have one of their players in contention.

Bayern claimed the German league title and German Cup as they completed the treble in 2012-13 and their coach Jupp Heynckes, who has since been replaced by Pep Guardiola, is up for the coach of the year award.

Benitez led Chelsea to the Europa League trophy last season before leaving for Napoli and being replaced at Stamford Bridge by Mourinho, who left Real Madrid in the summer after failing to win the La Liga or Champions League.

The winners will be voted for by the captains and head coaches of the men's national teams as well as by international media representatives selected by France Football magazine.

France Football started the Ballon d'Or to honour the European footballer of the year and England's Stanley Matthews was the first winner in 1956.

In 2007 the award became a world player gong and three years later it merged with Fifa's own world player honour.