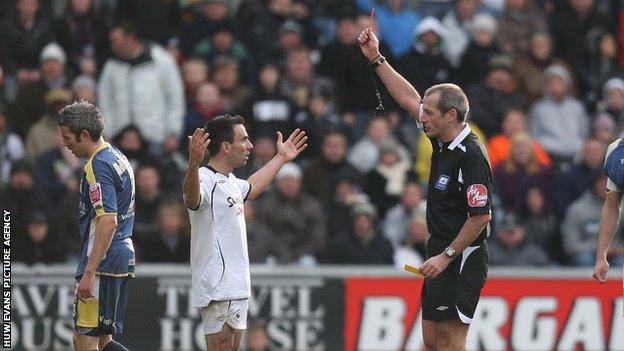 Leon Britton has called for cool heads if Swansea are to overcome Cardiff City in Sunday's first Premier League Welsh derby at the Cardiff City Stadium.

The two sides last met during the 2010-11 Championship season, with each team picking up a win on the road.

Neither of the sides has ever completed a league double over the other.

"It's very different. It's like a cup final. It's not like a league game. Sometimes it's crazy," said Swans midfielder Britton.

"It can be hard to control the game as it is so fast and furious at times.

"But they are great occasions to be involved in with great atmospheres."

Britton is one of a few Swansea regulars to have previous experience of the intimidating atmosphere of the derby.

So he is more aware than most that keeping control of emotions will be important on Sunday afternoon.

"There have been a few sendings-off in recent games, but in the five or six derby games I've played in they have been pretty good, not too much trouble or 22-man brawls," added the 30-year-old.

"There's been the odd sending-off, but they have usually been for two yellow cards rather than straight reds.

"But the main thing is you want 11 players on the pitch to give you the best chance to win."

Britton does not believe Swansea's Spanish contingent will need too much guidance to realise just how significant the game will be.

"We can relay what the game means to the football club, the fans and the city," he said.

"They know. They have been here a while now.

"They know the history of the football club. To be fair, the Spanish lads have played in derby matches over there.

"They are used to it and in the build-up we will let the new players know how much it means.

"It's great for Welsh football that the derby is in the Premier League."

Both sides go into the match on the back of 0-0 draws. Swansea shared the points with West ham United on Sunday and Cardiff drew with Norwich City.

Those results left the Bluebirds 16th in the table, but only two points below the Swans who lie ninth.