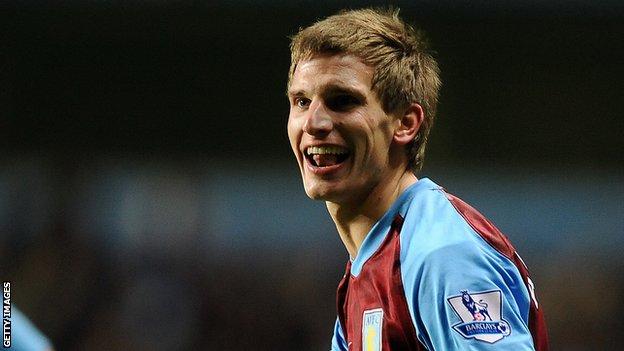 Winger Marc Albrighton is poised to join Wigan on loan from Aston Villa.

A recent throat operation has prevented the 23-year-old from featuring in the Premier League this term, his solitary outing coming in the League Cup.

Wigan manager Owen Coyle said: "We are certainly getting closer. We might be able to get Marc involved tomorrow [Wednesday] night [against QPR]."

Coyle also confirmed that Wigan keeper Scott Carson, 28, is set to be out for several weeks with an ankle injury.

Carson was hurt in the warm-up prior to

Lee Nicholls, who at The Valley, will keep his place as Harry Redknapp's Rangers visit the DW Stadium on Wednesday.

Albrighton, who progressed through Villa's youth system into their first team, has made 81 senior appearances for the club.

"He's a player I've always admired and someone I tried to buy at Bolton a couple of years ago," continued Coyle.

"I've got no doubts about his qualities."