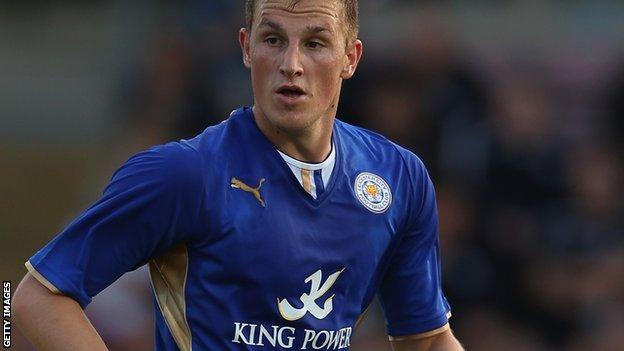 Leicester City striker Chris Wood has said he needs to strive for perfection in a bid to start more matches.

The 21-year-old has started just three Championship games this season, finding himself behind David Nugent and Jamie Vardy in the Foxes' pecking order.

But Wood is expected to start against Premier League side Fulham in the League Cup fourth round on Tuesday.

"I have do the basics and make sure my game is perfect," Wood told BBC Radio Leicester.

"When I'm on the pitch I have to do the business. I'd love to start, go on and get some goals and take it from there."

With Nugent, 28, netting his eighth goal of the season against Bournemouth on Saturday and Jamie Vardy striking for the fourth time this term to move the Foxes into second in the Championship, Wood accepts he needs to be patient.

The striker, who moved to the King Power Stadium from West Bromwich Albion in January, is yet to score in the league this season.

"It's frustrating watching them play, I can never say it is easy sitting back seeing them start, but it is something you can take when the team is winning," Wood said.

The New Zealand international has used the Foxes' League Cup run to impress, scoring a hat-trick in Leicester's second round tie against Carlisle.

Now up against Premier League opposition, Wood feels Leicester face a Cottagers side intent on imposing themselves as contenders.

"They will come here thinking they will win it," Wood said.

"This is when they would be thinking about fighting for a trophy, a win here and they are in the quarter-finals and they can kick on from there."