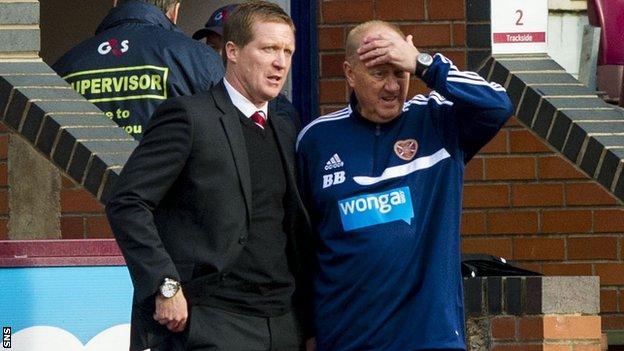 Hearts assistant manager Billy Brown believes most people have written off the club's chances of avoiding relegation this season.

The Tynecastle side are 15 points adrift at the foot of the Premiership.

"What a challenge it is to get a result (at Easter Road) and a challenge to go on for the rest of the season and prove everybody else wrong," said Brown.

"Everyday I've ever been in football, you've got to prove yourself and it makes it sweeter when you prove yourself right when everybody else says, 'you couldn't do it'.

"I've got a feeling that, listening to everybody and reading the papers, they have [written us off]. I feel that. Maybe the pressure's off.

"I certainly haven't and the manager of the club hasn't written us off either and he's fully up for the challenge."

Hearts began the season with a 15-point deduction after the club entered administration in June but got off to a decent start with two wins and a draw in their first four league matches as well as making progress in the League Cup.

However, Locke's side travel to Easter Road having lost their last three matches.

"We had a major task, we've still got that major task and we've still got enough games to be successful in that task, so nothing's changed much, really," added Brown, who was previously Hearts assistant during Jim Jefferies' two spells as Tynecastle boss.

"We've got one of the best up and coming managers in the game. He's meticulous, he's passionate about the game, he's got a stern streak in him that will do well and get us out of this situation. At the moment, there isn't a better man.

"I worked in partnership with one of the best managers this country's had for a long time so I know what it takes and Gary Locke's got what it takes to get us out of the situation we're in.

"We're getting hammered from every angle at the moment but things will change.

"There's no great cloud hanging over the place. Everybody likes to think there is but there isn't. We and the management staff here are fully up for the task.

"It [Wednesday's match] is a great game to win and we've certainly got a chance of winning it. I don't go into this game with no confidence and neither do the players."