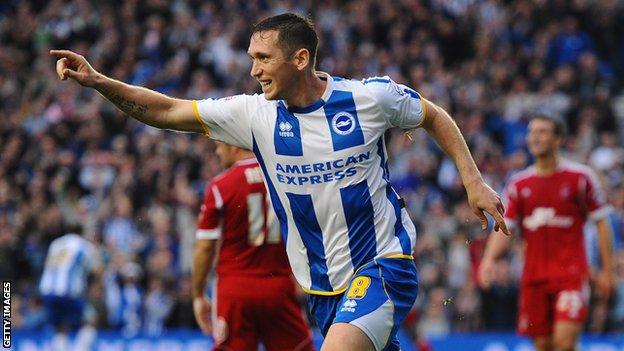 Brighton midfielder Andrew Crofts was impressed with his side's resolve in the 1-1 draw with Watford on Monday.

The Seagulls fell behind to Sean Murray's early goal but rallied to secure a point, with Crofts equalising.

The 29-year-old told BBC Sussex: "We showed character as their goal took a massive deflection.

"I thought we played some really good stuff. We could easily have dropped our heads but we were straight back on it in the ascendancy."

Andrew Crofts' goal against Watford was his fourth of the season and made him Brighton's joint-top scorer in the Championship.

The 29-year-old failed to score in 24 league appearances for the Seagulls last season.

Hornets goalkeeper Manuel Almunia denied Crofts a late winner and the Wales international felt Albion could have ran out victors had it not been for the Spaniard's performance.

"A point was the least we deserved," Crofts said.

"We played really well and were unlucky not to get the three points.

"Their keeper got man-of the match, which says it all. They are a real good side.

"We created plenty of chances and could have had a few more if it wasn't for their keeper, who was on fire."

However, Watford were controversially denied a second goal just after half-time when, with the score 1-0, Fernando Forestieri's shot appeared to have crossed the line before defender Gordon Greer could clear the ball away.

But with Brighton on a run of one win in nine games and contending with an injury-hit squad, Crofts welcomed a piece of fortune.

"It would have been our luck. We definitely didn't deserve to lose that game.

"Maybe that could be the turning point, and that little bit of luck we needed."