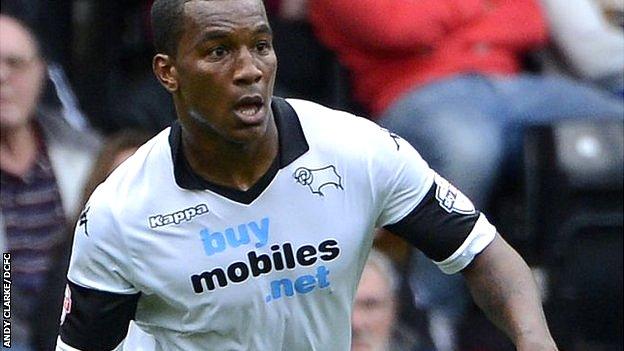 Liverpool's Andre Wisdom has said he will use his loan spell at Derby County to become a more versatile player.

The 20-year-old debuted at right-back in the Rams' draw with Birmingham City on Saturday, having also been used as a centre-back with Liverpool.

For the England Under-21 international, his switch from Anfield is about more than regular first-team football.

I've come to Derby to gain experience, match time and fitness and, of course, to help Derby push for promotion

"Versatility can be another strong attribute to help my career," Wisdom told BBC Radio Derby.

"To gain experience, playing more than one position is good for me.

"I played most of my youth career at centre-back, so obviously that is where I feel most comfortable.

"But I've played right-back, centre-back, left-back and even holding midfield in the past. At a young age, I just want to play football."

Wisdom, who scored on his Liverpool debut in the Europa League last season and went on to make 22 appearances for the Reds before moving to Pride Park, said his introduction to the Championship was an enlightening experience on the demands of the second tier.

"I can see that it is physically demanding, it's a different type of football and I'm coming up against different types of players," Wisdom said.

"But the main thing remains the same, no matter the level, and that is the want to win. Derby have that great mentality to work.

"I've come to Derby to gain experience, match time and fitness and, of course, to help Derby push for promotion. I see the players they have got here are of great quality and that they can achieve it.

"That performance against Birmingham shows it even if the result doesn't highlight it."