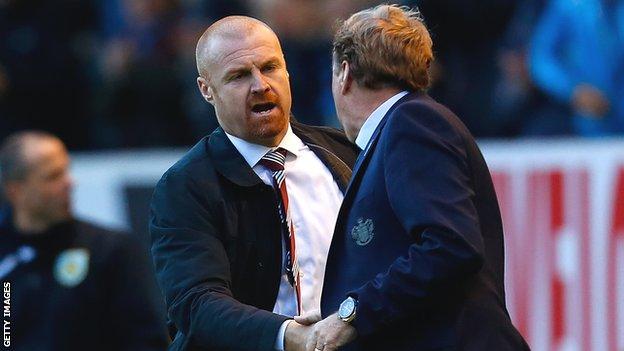 A reduced playing budget, a relatively small squad and their star man sold two days before the start of the season. The recipe for a tough campaign? Try telling Burnley.

Many pundits were writing the Clarets off even before the ink had dried on Charlie Austin's contract at Queens Park Rangers, and the sale of a striker who scored 42% of the Lancashire club's goals last term only appeared to strengthen their argument.

A neat twist then that, last Saturday, against Harry Redknapp's Rangers - Austin's new employers - sent Burnley three points clear at the top of the Championship.

The managerial merry-go-round: Who is still on board?

Henning Berg's reign at Rovers lasted 57 days before he was dismissed, while Michael Appleton left Blackpool to replace Berg at Ewood Park. Blackburn then sacked Appleton after 67 days.

Dougie Freedman is still in charge at Bolton but his Wanderers side, who were expected to challenge for promotion, have made an unconvincing start to the 2013-14 campaign.

After finishing 11th last term, Sean Dyche has led Burnley to the top of the Championship, winning 10 and drawing two of their first 13 games.

Not a bad anniversary present for Dyche, who celebrated a year in charge at Turf Moor on Wednesday reflecting on a in the fourth round of the Capital One Cup the previous evening.

Dyche - a former defender who made more than 500 senior appearances during his playing career - served his managerial apprenticeship at Watford, firstly as a youth coach and then as assistant to Malky Mackay before

He soon discovered that, when it comes to football management, success does not always guarantee longevity.

Despite leading the Hornets to their best league finish for four years in his only season at the helm, he was and was replaced by Gianfranco Zola.

At a time when the for Championship clubs in England's north west - Blackburn, Blackpool, Bolton and Burnley all named new bosses within the space of 13 days - last October flew slightly under the radar.

"Sean's appointment came on the back of the and right in the middle of the chaos down the road at Blackburn," recalls BBC Radio Lancashire's Scott Read.

"His name was mentioned as a potential replacement but he certainly wasn't the front runner with the bookmakers early on. All the local speculation surrounded Mick McCarthy, who was also out of work at the time, while Ian Holloway was a popular choice amongst the fans.

"The club's decision to appoint Dyche passed without hardly a mention away from Lancashire, but it has attracted plenty of attention since."

Co-chairman John Banaszkiewicz was always sure the board had picked the right man.

"We interviewed a lot of people and Sean did stand out from everybody else," he told BBC Radio Lancashire. "He's very good at getting the best out of players."

Dyche's first task was to shore up the worst defence in the second tier. They had let in 29 goals in their first 13 league matches, and conceded only 31 more in the remaining 33 games they played in 2012-13.

What he also had to change was the mentality of some Burnley supporters.

"When I got here, the club was in transition after coming down from the Premier League [in 2010]," explained Dyche.

"We had to bring everyone together and settle them down. We've affected the things we could affect, and the things that we can't, we've said we can't.

"We are a 'town club' and a club that supports the town, and that link has become more authentic with the realities. They're not negative realities, they're just realities."

Those realities hit home in August when the Clarets published their most recent annual accounts and posted a loss of £8m. Although the club were very keen to stress that they are now cutbacks had already been made.

Midfielder and goalkeeper two veterans of their promotion-winning 2008-09 campaign, were released. Keeper and forward also left, and then there was the departure of their

"The reality of Charlie going was always there and was always hanging over us," added Dyche, who took charge of his 100th game as a manager in midweek.

"There will be about some of our players in the future - not at this moment, but certainly in the future. That's the reality of the club. It's been there for 131 years. There have always been moments when the club has had to sell players.

"It gives someone a great opportunity. The next one comes in and gets a chance to grip it."

The 21-year-old frontman has finally found full fitness, and too, after His 13 goals and eight more from strike partner Sam Vokes have propelled Burnley to the Championship summit.

They have won 10 of their first 13 games in the league, while a run of eight successive victories in all competitions was only ended by on Tuesday.

Of course, it is still early days, and there is very little talk of the 'p' word at Turf Moor just yet.

"The players deserve all the accolades they've got," said Dyche. "They've kept working and improving, and we've got ourselves to the top of the table.

"But you can only go one step at a time.

"We haven't got a never-ending group of players and the challenge for us is when we get injuries and suspensions. We haven't got major money and we haven't got a massive squad - again, it's not a negative fact, it's just a fact.

"The positive of that is that we've got a motivated group of players. That motivation can only go into one game at a time."

So Burnley are taking things steady and not getting too carried away, but they are no longer flying under the radar. Can Dyche write another chapter in their proud history?

There are only 33 matches to find out.