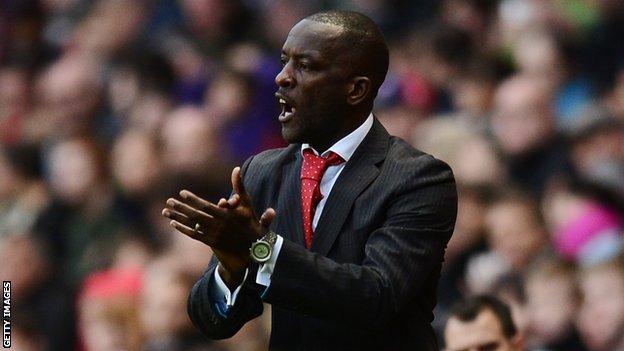 Charlton Athletic manager Chris Powell has called on his side to find a cutting edge in front of goal.

The Addicks have scored just nine league goals this season, the joint-lowest total in the Championship.

He told BBC London 94.9: "Even though the goals against column isn't too bad, ultimately you have got to win games.

"We are getting it right at one end but we have got to be as clinical and ruthless as we can at the other. That's why strikers get all the money."

Yann Kermorgant, who suffered an ankle injury in the 0-0 draw against Wigan on Sunday, is Charlton's top scorer in the league with three goals this season.

Wales international Simon Church has two while four other players have one each.

After being in a real sticky place we haven't lost for four games. That will no doubt help with the mentality and the supporters will feel better about their team

Charlton are two points above the relegation zone, having won only two games this season, and Powell knows they need to hit the back of the net more often.

"To win games you need chances created for your goalscorers and someone who is going to sniff a chance out for you," he said.

"Simon, Marvin [Sordell] and Yann will do that.

"You have got to have someone who is maybe going to nick a goal out of nothing."

Despite their goal-shyness, the south east London side are currently on a four-match unbeaten run.

"We are in a decent place and we have got to work hard to stay there," Powell said.

"After being in a real sticky place we are still in the lower reaches but we haven't lost for four games. That will no doubt help with the mentality and the supporters will feel better about their team.

"It is going to be a long old season and the winter months are coming up and that is really where you get yourselves going.

"Just at the right time we are getting in a place where we can keep trying to nick a point or three. You are desperate to get three points just to keep moving forward,"