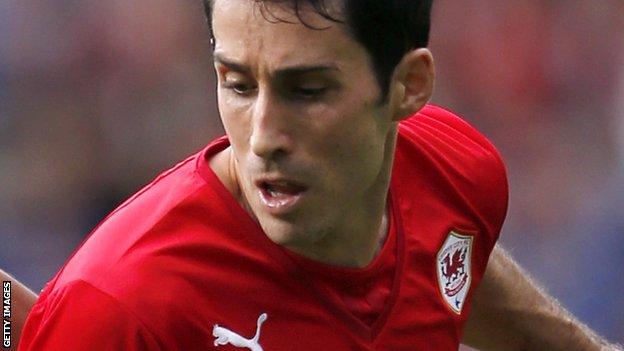 Peter Whittingham says Cardiff City will have to be patient and wait for their opportunities against Swansea City at the Cardiff City Stadium.

The sides meet in the first all-Welsh clash in the Premier League on Sunday.

Midfielder Whittingham is well aware his side cannot afford to be frustrated by Swansea's patient possession game.

"They pass the ball around a lot but there might be times at the weekend where we'll have to be patient," Whittingham said.

"We know Swansea do have a lot of possession but we need to stay calm, stay compact and disciplined.

"And when we do get the ball we can expose them."

Whittingham, who has played in five south Wales derbies, believes the home supporters at the Cardiff City Stadium will have a part to play.

The 29-year-old praised the Bluebirds fans for the way in which they lifted the team during August's 3-2 win over Manchester City.

Cardiff came back from being a goal down to win and Whittingham says home advantage will be crucial against Swansea, who have won twice away from home in the league so far this season.

"The Man City game was something I didn't really know could happen," the former Aston Villa player added.

"I remember thinking when we went 1-0 down, we were about to kick-off and the fans went again.

"It was an unbelievable experience and we obviously got the goals after that and the whole place erupted again.

"I think it definitely can be a big factor. It's going to be a huge day and one that we hope we can win."