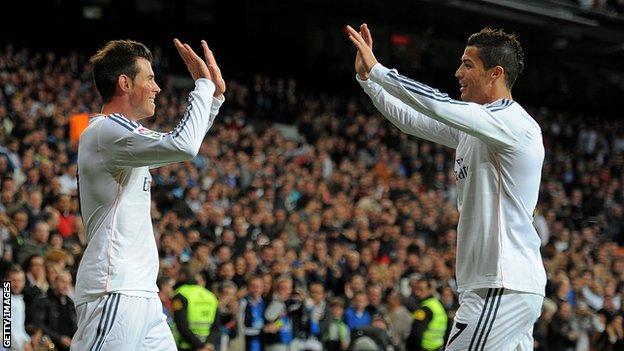 The Wales international, making his first start at the Bernabeu, opened the scoring with a smart finish, before adding a second soon after.

Ivan Rakitic scored two and Carlos Bacca got one for Sevilla, who had Stephane Mbia sent off.

Records for Ronaldo and Real

Real are six points behind leaders Barcelona after the win and two off second-placed Atletico.

The two goals took Bale's total for Real Madrid to three goals in six games since his £85m move from Tottenham on 1 September.

It was the ideal response to a low-key performance by Bale in the 2-1 El Clasico defeat by Barcelona on Saturday, when he was making only his second start of an injury-hit season.

An added boost for manager Carlo Ancelotti was that Bale completed 90 minutes for the first time since joining Real.

His first goal against Sevilla was one of quality as he powerfully swept the ball into the top corner of the net after being set up by Benzema.

Bale doubled Real's lead just before the half hour mark when his free-kick took a huge deflection off the Sevilla wall to loop into the net.

The hosts then looked to be in control when Ronaldo confidently dispatched a penalty after Isco was brought down inside the area.

But Sevilla fought back before the break as Sergio Ramos was judged to have pushed Diogo Figueiras in the box and Rakitic scored the spot-kick.

Bacca then rolled the ball into the net from Vitolo's pass to pull the visitors to within one goal of Real.

A sweeping counter by the hosts after the break made it 4-2 when Benzema side-footed in from a pass by Bale, who then provided the assist for Ronaldo to convert from a similar position.

Rakitic curled in a third for Sevilla but victory was assured for Real when Ronaldo completed his hat-trick with a deflected effort.

A difficult match got worse for the visitors 15 minutes from full-time when Mbia earned his second yellow card of the game for his part in a clash with Luka Modric.

The man disadvantage left a tired Sevilla side exposed and Real pushed forward in the closing stages looking for more goals.

Their seventh arrived 10 minutes from the end of the game when Benzema headed in Marcelo's cross.

Shots on Target
Home10
Away6