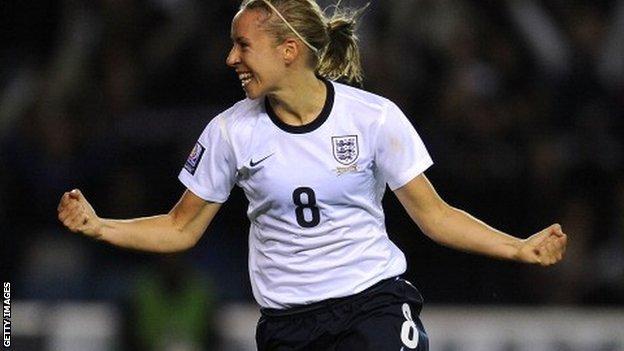 England's unbeaten start to their 2015 World Cup qualifying campaign continued as they secured a convincing 4-0 victory over Turkey in Adana.

England's dominance continued after the break, with Toni Duggan heading home Aluko's corner to make it 3-0.

Duggan was key to England's fourth goal as her header hit the crossbar and crossed the line via Jordan Nobbs.

Prior to the match, England coach Brent Hills had warned his team against complacency following their 8-0 win in last month's reverse fixture.

But England, who are now nine points clear of second place Wales in their group, were barely threatened.

It took the visitors only 10 minutes to break the deadlock, with Aluko thundering the ball beyond goalkeeper Fatama Sahin.

Chelsea forward Aluko was again in the thick of it as Turkey centre-back Sibel Duman handled her cross from the left, which led to Williams doubling England's advantage from the penalty spot.

The visitors continued to dominate but were unable to add to their tally before half-time, with Aluko denied by the offside flag in stoppage time.

After the break, Williams and Ellen White forced Sahin into a brilliant double save, but the goalkeeper could do little to prevent Duggan scoring from the subsequent corner.

Aluko then struck the crossbar from distance, while an angled drive from captain Alex Scott brought another fine save.

A fourth England goal seemed inevitable, although when it finally did it came rather fortuitously as the ball crept over the line after ricocheting off Nobbs.

Sahin's fine goalkeeping performance continued as she prevented England from further extending their lead, twice denying Nobbs and then Aluko.

But England had by then done enough to earn their fourth win of the qualifying campaign.

England's next World Cup qualifier is at home to Montenegro on Saturday, 5 April 2014.