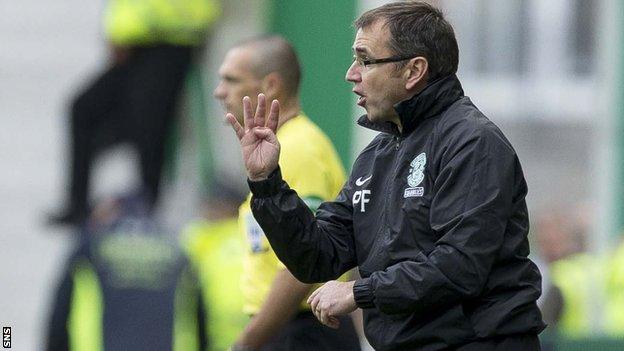 Manager Pat Fenlon has one eye on another cup final appearance as Hibs prepare to face Edinburgh rivals Hearts in the League Cup quarter-finals.

"When Celtic got knocked out in the last round, I think everyone left thought 'we've got a good chance here'," he told BBC Scotland.

"And there is going to be four good sides going out in the quarter-finals.

"It's a big game against Hearts and it's a big bonus going into the semi-finals without the Old Firm."

Fenlon has taken Hibs to two consecutive Scottish Cup finals since he arrived at Easter Road in November 2011, but both ended in heavy defeats; to Hearts and Celtic, respectively.

And the home side are favourites to progress against a callow Hearts team, who have picked up only one point from their last seven Premiership matches.

However, Hearts did beat their city neighbours at Tynecastle on the second weekend of the season and have enjoyed good fortune in the tournament they finished runners-up in last season, coming through on penalties in the previous two rounds.

"These are the games you look forward to," said Fenlon. "But you've got to make sure you play the game and not the occasion.

"In derby games, all that matters is winning. People only remember the results and it's very important that you come off being a winner.

"We're at home and it gives us a good chance to be in a semi-final."

Hibernian, who lifted the League Cup in 2007, were beaten at home by Aberdeen on Saturday and Fenlon is seeking an immediate response.

"We let ourselves down and we need to bounce back from that," he explained.

"There's no better way of doing that than against our big rivals.

"The players were disappointed at the weekend, but they are bright and bubbly and looking forward to putting that right.

"We've been on a decent run of form, but it's a derby game and Hearts will come thinking 'we haven't got a lot to lose', so we have to match them in intensity.

"We've got some good players and we need to get them on the ball.

"We've got a strong group and a good blend of young players, middle-of-the-road 24 to 25-years-olds who have played a lot of games, and senior players."