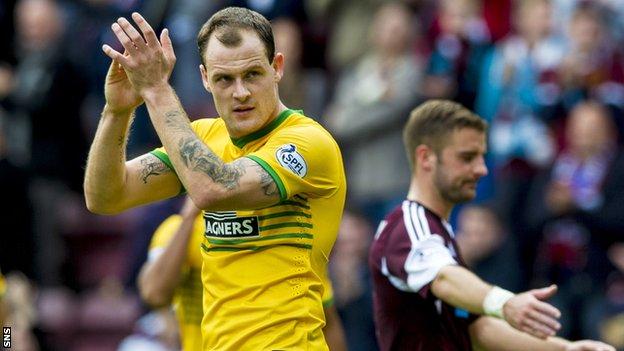 The 25-year-old Republic of Ireland international turned down a new deal in the summer, with his prior arrangement due to expire at the end of this term.

I didn't realise this season that I'd scored my 50th goal for Celtic. I've a long way to go to reach 100

"I'm enjoying my football and I'm hoping this just helps me kick on."

Stokes missed a large chunk of last season with an ankle injury but has been a regular starter during this campaign, scoring five goals in 16 appearances.

"I've been happy enough with the way it's gone for me this season," he said. "I'd have liked a few more goals by now, but that'll come.

"I knew this was going to be a big season for me because I knew I had to come back after missing the majority of last season and I needed to come back strong and thankfully I've started the season reasonably well."

After spending his youth career with Shelbourne and then Arsenal, Stokes joined Falkirk on loan from the Premier League club in 2006.

He returned to Scotland with Hibernian in 2009 after spells with Sunderland, Sheffield United and Crystal Palace.

A transfer to Celtic followed in 2010 and Stokes has helped Neil Lennon's side win two Scottish Premier League and two Scottish Cup titles.

Stokes made his senior debut for Republic of Ireland in 2007 but fell out of favour during manager Giovanni Trapattoni's time in charge.

However, following Trapattoni's departure, the striker was recalled by interim manager Noel King and featured in the recent matches against Germany and Kazakhstan.

"I'm delighted to be back involved in the Irish squad," added Stokes, who has reached a club goal-scoring milestone this term.

"You see the quality of the squad, so I'm going to have to keep up my club form to try to stay involved in that.

"As a striker, you want to be getting over 20 goals a season and that's always the aim, but I don't focus on it too much.

"I didn't realise this season that I'd scored my 50th goal. It wasn't something that preyed on my mind.