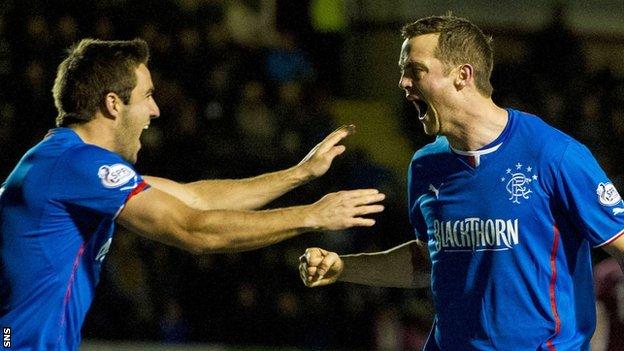 Reaching the Ramsdens Cup final is a major breakthrough for Rangers, according to manager Ally McCoist.

Rangers reached the final of the tournament for clubs outside the top flight by beating Stenhousemuir 1-0.

"The healing process which gets us back to where we want to be is going to be a slow one," said McCoist.

"This is another step. I said to the boys before the game that winning tonight would be a major step forward for the club."

It is the first time a team in Rangers colours will be in a national final since 2011, when they beat Celtic to win the League Cup.

It's a game against Raith Rovers and, although it's not for a few months, it's something for everyone to look forward to

And it is the first time they have reached the Ramsdens Cup final, having made their debut while in Division Three last season.

"The players wanted to get there, as did the staff, and it's a massive opportunity to give the fans a big day out," McCoist told Rangers' website.

"They deserved something like that as a massive thank you for the way they have supported us.

"They deserve to get to a final and now they've got that opportunity.

"It's a game against Raith Rovers and, although it's not for a few months, it's something for everyone to look forward to."

It took a Jon Daly goal, following a mistake from goalkeeper Chris Smith, 15 minutes from time to subdue a Stenny side hammered 8-0 by Rangers in a League One meeting last month.

"We deserved to win the game," said McCoist. "Credit to the opposition because they made it difficult for us and they worked extremely hard.

"They had a wee chance to score themselves, but with our overall play and the chances we created, we definitely merited our victory.

"It would be wrong of me to be overly critical over our conversion rate because we've been good at that lately."

Rangers captain Lee McCulloch was relishing the prospect of the final in April.

"I've been fortunate to play in some big finals with Rangers in the past and that was great," he said.

"I would say this one is up there with them because personally I'm running out of time in my career.

"I've got to make the most of everything and this is the first final this group of boys has got to as a group."