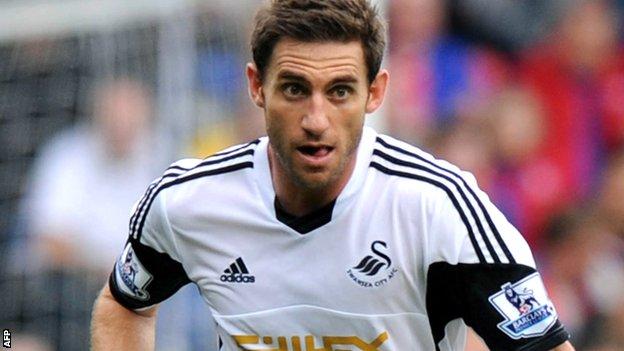 Angel Rangel is hoping that Swansea City's greater Premier League experience will give them the edge over Cardiff City in their all-Welsh derby.

Swansea go to Cardiff on Sunday for the first meeting between the sides in the Premier League although there have been memorable matches in other divisions.

"It's going to be a tough one, especially away from home," said defender Rangel.

"But hopefully the experience we've got in the Premier League will help us."

Cardiff are Premier League newcomers while Swansea are in their third season in the top flight after promotion in 2011.

The sides last met during the 2010-11 season, with Swansea winning 1-0 at Cardiff and the Bluebirds victorious by the same scoreline in the return at the Liberty Stadium.

I think they've [Cardiff] done ok, especially for a team that's just come up. They haven't had easy games

Rangel has played in seven previous south Wales derbies and is aware what victory against Cardiff would mean to the Swansea fans.

But the Spaniard says the Swansea players cannot get carried away by the occasion and must keep their composure and target a third away win of the season.

"It's a game we want to win, especially for the fans. They deserve three points," Rangel added.

"We know it's only three points but we know there's always emotions about these games and the fans are very excited about it.

"We're trying to keep cool because at the end of the day you can get too excited. We need to keep cool and try and win it."

"To be fair they have done alright, especially in games where they didn't expect to win," Rangel added.

"I think they've done okay, especially for a team that's just come up. They haven't had easy games.

"There' still a long way to go but so far they're looking good."