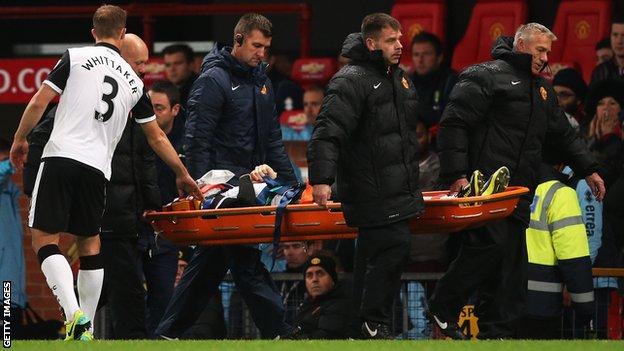 Norwich's Robert Snodgrass has been released from hospital after being knocked out during his side's 4-0 League Cup defeat by Manchester United.

The midfielder, 26, suffered a blow to his eye socket in a collision with United defender Rafael and play was stopped for eight minutes.

He will return to Norwich on Wednesday after being discharged from hospital in Manchester on Tuesday night.

And he will be assessed before Saturday's trip to Manchester City.

"He was out for a period of time," said Hughton after Tuesday's game. "It is very much concussion.

"By the time he was on his way out he was awake and aware of what was happening around him."

Snodgrass has played in all but one of Norwich's league games this season and lasted 65 minutes at Old Trafford before being carried off on a stretcher.

Winger Nathan Redmond was also forced off with a hip injury in the defeat and midfielder Alex Tettey is currently sidelined by an ankle problem.

"Nathan felt a muscle just above his hip. It was quite painful at that stage," Hughton told BBC Radio Norfolk.

"It meant two wide players off in one game. We made some changes for the game and having lost two players I think it has turned out a good decision that we did."

Norwich, five points and two places off the bottom of the Premier League table, travel to Manchester City on Saturday as they look for only their second league win since the end of August.