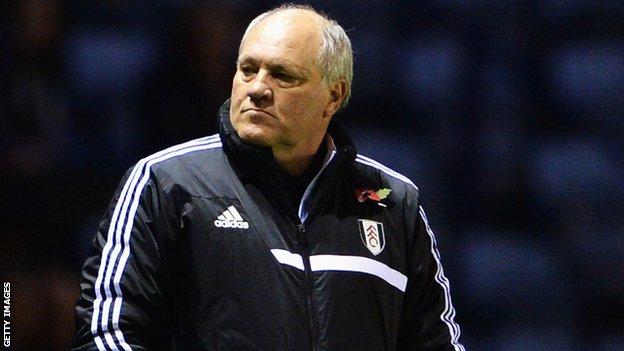 Fulham manager Martin Jol insists he does 'not feel under pressure' after his side were knocked out of the League Cup by Championship side Leicester.

Questions have been raised about the Dutchman's future following Fulham's poor start to the season.

They sit 14th in the Premier League table after just three wins.

"I don't feel pressure because we're not bottom of the league, there are six or seven other teams on similar points and lower," he said.

After back-to-back wins over Stoke and Crystal Palace, Jol's side did not manage a single shot on target as they lost 2-0 at Southampton on Saturday.

After losing to an 89th-minute goal at Leicester, the Cottagers' next two Premier League matches are against Manchester United on Saturday and Liverpool on 9 November.

"There are a few teams on 10 and 11 points, so we have to come up with a surprise result (against United or Liverpool) and if not we have to get the points against the other teams we play against, added Jol.

"We played an almost perfect second half against Palace (a 4-1 win) and we played the same team and lost against Southampton so we have to pick ourselves up."

"A few boys showed tonight they could play and I thought the spirit during the game was good - but we gave cheap goals away."