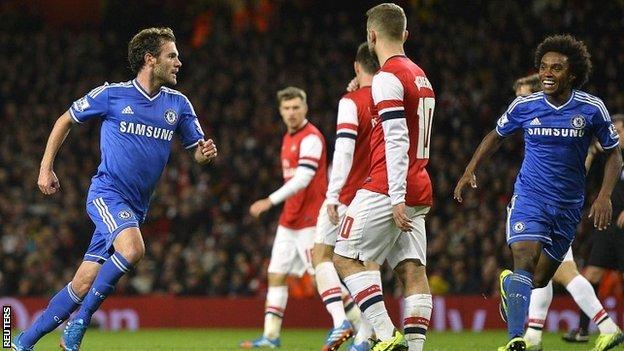 Arsenal boss Arsene Wenger said a Capital One Cup fourth-round defeat by Chelsea will not hamper his side's momentum ahead of a tough fixture list in November.

The Gunners lead the Premier League and face Liverpool and Manchester United in their next two domestic fixtures.

Asked if his side's confidence had been dented, Wenger said: "No. It's a different competition."

Since losing to Aston Villa in their first game of the season, Arsenal recorded 11 wins in 12 matches before losing to Borussia Dortmund in the Champions League a week ago.

They recovered by beating Crystal Palace on Saturday but the defeat to Chelsea was the first time they have lost two consecutive games at the Emirates since February.

Having only faced one team from last season's top seven - Tottenham - they now host Liverpool before trips to Dortmund and Old Trafford. They then host fifth-placed Southampton, who have beaten Liverpool and drawn with Manchester United recently.

Wenger, who made eight changes to the side that beat Palace 2-0 at Selhurst Park, said Chelsea punished a mistake for Azpilicueta's opener. Chelsea broke forward after an Arsenal corner with Carl Jenkinson's header failing to reach Lukasz Fabianski.

But he said it was too early to say that Arsenal could not perform against the stronger teams.

"Let's not reach a conclusion too quickly," he said. "If you take the points we have made since 1 January, it's more than everybody else. Over a longer distance, you'll see more of the quality of the team than in the last two games.

"It is true that it is difficult to swallow what happened to us in the last week, but the mistakes are so big that they can be corrected.

"After the first game against Aston Villa, we were relegated. Today we are in a strong position in the league.

"It is down to how we get rid ourselves of these mistakes without losing the belief in our qualities. That is what is at stake."