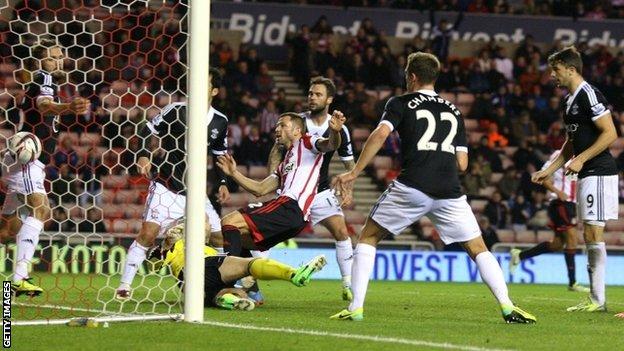 Goals from Phil Bardsley and Sebastian Larsson secured Sunderland a Capital One Cup quarter-final tie against Chelsea at the expense of Southampton.

Bardsley opened the scoring in the second half when he was quickest to pounce after Saints keeper Kelvin Davis had parried Jozy Altidore's header.

Substitute Larsson added a second when he slotted in from inside the area from Altidore's beautifully-weighted ball.

Fewer than 16,000 spectators watched the League Cup encounter at the 49,000-seater Stadium of Light

Southampton grabbed a late goal when Maya Yoshida headed in.

The Saints pressed again but Sunderland looked in control in the last few moments, with James Ward-Prowse going closest to equalising with a wild volley from outside the area.

The second half was far more entertaining than an uneventful first 45 minutes when neither keeper was tested.

Uruguay midfielder Gaston Ramirez had the clearest sight on goal for Southampton when he was played in by Jack Cork, before smashing his strike over the bar from 10 yards.

At the other end, Italian Emanuele Giaccherini, on his first start for manager Guy Poyet, got his feet in a muddle from eight yards when he would have had a clear shot on goal before USA striker Altidore fired wide with a low drive from 20 yards.

The Black Cats raised their tempo after the break and took the lead just before the hour mark when Bardsley got the final touch in a goalmouth scramble after Davis had saved Altidore's header from Johnson's free-kick.

The goal inspired the Southampton players, who began to display something similar to their impressive league form.

First, they had a penalty appeal waved away by referee Lee Mason after defender Calum Chambers seemed to have been pulled down by Jack Colback.

And moments later, Jay Rodriguez almost scored a freak goal for his side when keeper Vito Mannone's clearance struck the back of the forward and almost looped into the empty net.

But they were dealt what proved to be the killer blow five minutes from time, when Sunderland broke with pace and Larsson added the finishing touch.

Yoshida's late header from Ward-Prowse's delivery gave Southampton a flicker of hope, but straight after the restart Sunderland put 10 men in front of the opposition, who created just one more half-chance which fell to Ward-Prowse.

"Of course, it's a cup competition, you need to win. Everybody knows a quarter-final is something we haven't achieved for many, many years, which is great for the football club.

"We are playing Chelsea, which is going to be special here at home.

"But the most important part was how. We passed the ball more today than in the last three games together, which is something we need to keep believing in because it has to be the way in the future."

"We are a little bit disappointed to be out of the cup because it was an important competition for us to provide minutes for our squad and for our youngsters who, as you know, we like to use.

"We have a squad and we need to use all the players and give minutes in this type of game because the season is so long.

"In the next couple of months, we have a very tough period of games and we need everyone in the best form because sure, it will be important for the rest of the season."