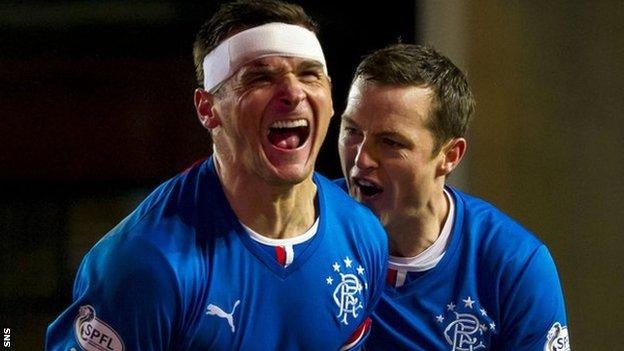 Rangers moved 14 points clear at the top of Scottish League One with a hard-fought win over their biggest challengers, Dunfermline Athletic.

Lee McCulloch opened the scoring from the penalty spot with 20 minutes to go as the Pars' Jordan Moore was sent off.

Jon Daly scored his 15th goal of the season to extend Rangers' lead.

Josh Falkingham pulled a goal back for the visitors, but Bilel Mohsni struck in stoppage time to delight the crowd of 43,000 at Ibrox.

Victory in the match re-arranged from last month at Rangers' request because of international call-ups ensured that they hold on to their 100% league record.

But it proved to be a bruising night for Rangers, with McCulloch requiring lengthy treatment on a head wound, while Andy Little was carried off on a stretcher wearing a neck brace after suffering a suspected broken cheekbone and Richard Foster also hobbled out of the action.

Captain McCulloch was off the field for 15 minutes before reappearing with a bandaged head.

Just as McCulloch was waiting to return to the pitch, Rangers came close when David Templeton set up Little for a downward header in front of goal that was saved by Ryan Scully.

Unfortunately for Little, he was injured during his attempts to open the scoring and eventually left the pitch on a stretcher.

Rangers were forced to make a second change after 37 minutes when Foster limped out of the action.

Seconds later, substitute Nicky Clark steered a header just wide of target, while Andy Geggan ballooned well over at the other end after being picked out by Ryan Wallace in plenty of space.

Templeton and Daly were off target with headers, but neither side were making much impact in front of goal until Moore was dismissed for felling McCulloch in the box.

The captain sent the goalkeeper the wrong way from the penalty and they doubled their advantage seven minutes later when substitute Sebastien Faure crossed for Daly to head home.

Dunfermline replied within three minutes, when Cammy Bell did well to save from Alan Smith before Falkingham pounced to lash home the rebound.

However, the points were safe for Rangers when Mohsni rifled home deep into stoppage time to leave the Pars in third behind Ayr United on goal difference.