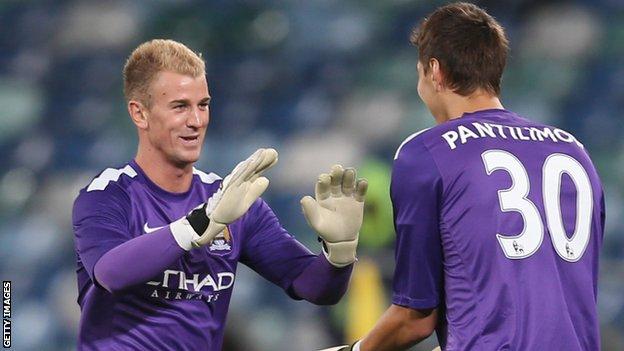 "Maybe the boss is thinking 'I'll give [Pantilimon] a go if he does well'."

Hart's mistake at Stamford Bridge was the latest in a string of errors in the opening weeks of the season, and Corrigan believes Pantilimon could become manager Manuel Pellegrini's first choice if he impresses against the Magpies.

Romanian Pantilimon, 26, joined City in 2011 but has never featured in the Premier League.

But even if England international Hart has a spell on the sidelines with his club, Corrigan, who played for City between 1967 and 1983 and won nine England caps, believes the 26-year-old has the ability to respond.

"I think the manager will make an assessment if he [Pantilimon] plays well against a Premier League side," said Corrigan, 64.

"Joe has to accept whatever happens and go back and work. He's got the quality.

"He's got to accept all the flack, it's difficult because he's still a young man. He knows he's made a mistake."

Corrigan also feels the changes in Hart's goalkeeper coaches has impacted on his performances.

Hart worked with Massimo Battara for three years until Roberto Mancini was sacked in May, and he is now being coached by Spaniard Xabier Mancisidor, who joined with Pellegrini.

At international level he is coached by Dave Watson, who also worked with Hart during his loan spell at Birmingham City in 2009-10.

Corrigan added: "I worry what the input of another foreign goalkeeping coach has on him.