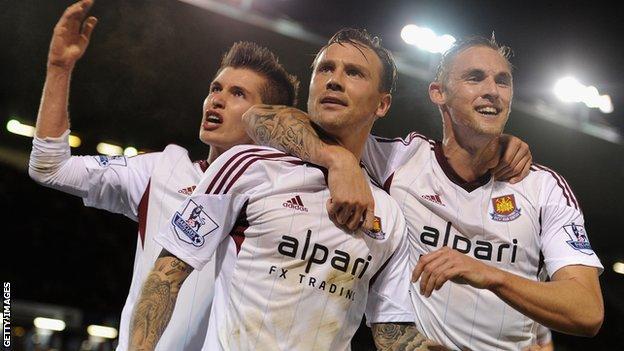 Madley awarded two late penalties, the first for a tackle by Jason Shackell.

Dyche thought there was minimal contact on Kevin Nolan and questioned Madley's view of the incident at Turf Moor.

"I respect referees. They've got a tough job and I respect that decision - albeit one that I disagree with," Dyche told BBC Radio Lancashire.

Burnley have reached the last 16 of the League Cup in four of the last six seasons, but have only progressed past that stage once in that time.

The Clarets beat Chelsea on penalties in round four of the 2008-09 competition and eventually reached the last four, where they were beaten by Tottenham in a two-legged semi-final.

"I think it's very difficult for referees to give a decision from behind an incident, particularly from distance and particularly with two or three players in the way.

"He assured me he had a good view of it and that's why he gave the decision. I have to go with that."

Matt Taylor scored from the spot to put the Premier League side in front and Jack Collison added a second penalty in stoppage-time to send the Hammers through to the last eight.

The hosts were also reduced to 10 men with Keith Treacy seeing red for his foul on Collison for the second penalty incident.

It ended a run of in all competitions for the Championship leaders, which was part of a sequence of 11 unbeaten matches.

Nevertheless, Dyche was pleased with his side's display against top-flight opposition.

"I thought we delivered a very good performance," said the 42-year-old.

"We looked to penetrate and put some good quality together, but you need to find that little edge to get in front and we've done that very well this season.

"It's a strange one - I'm certainly not overthinking it. There are some really good positives but there's a thirst to win and that's the disappointing side of it."