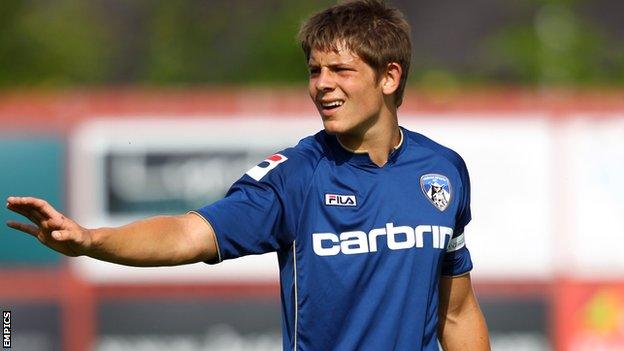 Oldham manager Lee Johnson says he expected his team to cope better without James Tarkowski after the Latics lost at struggling Notts County.

The young centre-back, who has impressed for the Latics in League One, missed the as he was serving a one-match suspension.

"He's a 20-year-old kid and we can't be asking him to carry the burden of all of us," Johnson added.

"But he is a good player and he's been great for us this year. We missed him."

Tarkowski, who has received five yellow cards this term, will return for the trip to bottom club Bristol City on Saturday.

Oldham went into their game at County, who on Sunday, having won three of their previous four matches in all competitions.

But Johnson was particularly frustrated with the way his team started, commenting: "I just feel bad as a manager. We've not turned up in the first half.

"I always want my teams to deliver the basics - commitment, energy and hard work. For some reason it wasn't there until half-time.

"I don't care whether you're playing in a reserve league or the Champions League - you've got to do the basics well and we didn't do that in the first half.

"We haven't had too many bad halves this season but we haven't got enough points and that's why, because we have halves like that."

The 32-year-old has also confirmed he is hoping to add two players to his squad on loan.