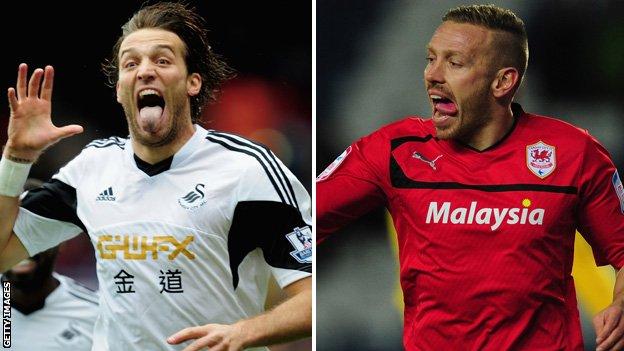 It was the best of times, it was the worst of times. This tale of two cities has certainly witnessed both.

But a new chapter in this great rivalry will be written on Sunday, when for the first time Cardiff City and Swansea City play the south Wales derby as a Premier League fixture.

A fixture that has seldom made international headlines in the past now has the chance to find a wider audience.

Rivalries have to start somewhere and the Swansea-Cardiff one began just over a century ago, on 7 September 1912, when the clubs played out a 1-1 draw at the Vetch Field in their first meeting.

But it seems it took a little longer for the current level of passion to surface.

"There is evidence to suggest that Swansea fans went to Wembley [for the FA Cup Final] in 1927 to support Cardiff," says historian Peter Stead - a season ticket holder at both clubs.

"There are also reports that when Cardiff narrowly missed relegation in the thirties, it was announced at the Vetch Field and there were cheers."

It would be hard to imagine such a scenario now, but perhaps absence made the heart grow fonder. Prior to former Cardiff star John Toshack's arrival as player-manager at Swansea in 1978, the two clubs had spent 15 years in different divisions.

Under 'Tosh', the Swans then reached the top flight, finishing sixth at their first attempt, while Cardiff were relegated from the second tier in the same season.

The Swans stay at the top would last just another season, however, and as they slipped back down the ladder to join their south Wales rivals in the basement leagues the rivalry had changed, as had Wales. Unemployment was high, and tensions were rising.

"Before my first derby for Cardiff, my name was read out over the public address and it was booed by both sets of supporters," recounts Alan Curtis, who started out at Swansea, where he is now first-team coach, and is one of 28 men to have played for both clubs.

The cheers of early meetings had been replaced, by the eighties, with jeers - and worse - as the games took on a life of their own in the eyes of both sets of supporters. Regrettably, many derbies of that decade were remembered for more than chanting, frequently marred by crowd trouble.

High: Securing promotion to the Premier League as Championship winners in 2013

Low: Defeat to Blackpool in the 2010 Championship play-off final

The tipping point came with the 1993 'Battle of Ninian Park' after which away supporters were banned from south Wales derbies.

The ban would last four years, and was ended by the introduction of 'bubble-trips', a practice that involves travelling supporters being escorted to the stadium on buses by police, and which has continued to the present day.

"They did stop the supporters coming," said former Swansea goalkeeper Roger Freestone, the man who has played in more south Wales derbies than anyone else. "It wasn't as intense - when both sets of supporters were in, there was a better atmosphere."

In 2008, Swansea won promotion to the Championship, returning to the second tier of English football for the first time in 24 years. It meant the return of the south Wales derby after a nine-year absence as a league fixture.

The passion was back; the rivalry was back. But this time the football was the focus, as both clubs entered the most successful period that collectively the two have ever known.

High: Winning promotion to the Premier League in 2011 with play-off final victory over Reading.

Low: Tony Petty's turbulent three months in charge of the club in 2001.

Saved from bankruptcy by a fan-led consortium, and from relegation from the Football League in 2003, the Swans were climbing the divisions under Spaniard Roberto Martinez, and under Brendan Rodgers would become the first Welsh club in the Premier League after a 4-2 play-off final win against Reading at Wembley in 2011.

Cardiff's fortunes were also on the rise, though progress was slightly more complex under the ownership of the flamboyant Sam Hammam.

Former Leeds chairman Peter Ridsdale secured a move from Ninian Park to the new Cardiff City Stadium in 2009, but with debts and bills mounting up, the Premier League eluded the Bluebirds until the arrival of a wealthy saviour in the form of Malaysian businessman Vincent Tan.

His cash would finally get them over the line and into the big time, but they would go there in red rather than blue after a controversial rebranding - not that it stopped the supporters celebrating.

Premier League football was coming to Cardiff - and so were Swansea.

The Premier League is broadcast globally by 80 different broadcasters. At the last estimate, the global audience for the 'most watched league in the world' is 4.7 billion, and on Sunday that many pairs of eyes will be watching as Cardiff and Swansea renew their rivalry.

"It's amazing to think there are two Welsh clubs that are going to be on the prime time four o'clock slot on Sunday afternoon, beamed to countries around the world," said Cardiff director Steve Borley.

The Premier League's most and least televised clubs in 2012/13

"I think the Welsh government are realising the power of football and what it can do in raising the profile of the country. It's certainly put Wales on the map."

Swansea's 2011 promotion was estimated as being worth £58m to the local economy, but since then the revenue the Premier League can generate has rapidly increased.

Last season Champions Manchester United earned £60m in TV money, but with a new contract in place this season, even the side that finishes bottom will collect more than that.

This derby has always had passion - now it has the money to match, which is why Sunday is such a historic occasion.

The first ever south Wales derby. Cardiff's Jack Burton cancels out Billy Ball's opening goal to earn a share of the spoils.

The third meeting after a 15-year spell apart. Alan Curtis and Leighton James help Swansea to a 3-1 lead at Ninian Park before a late thunderbolt from Jon Buchanan rescues a point for Cardiff.

Garry Thompson scores the only goal in the game dubbed 'The Battle of Ninian Park' as troubled flares between both sets of fans. Away supporters would be banned from derby matches for the next four years as a result.

A last-minute goal from Matthew Bound wins the last ever derby at the Vetch Field for the Swans. The two sides wouldn't play each other again in the league for nine years.

Swansea think they've won the last ever derby at Ninian Park with Joe Allen's first goal for the club in the 88th-minute before a last-gasp Ross McCormack penalty snatches Cardiff a point. Referee Mike Dean is hit with a coin thrown from the crowd.

No team has ever done 'the double' by winning both league matches in the same season.