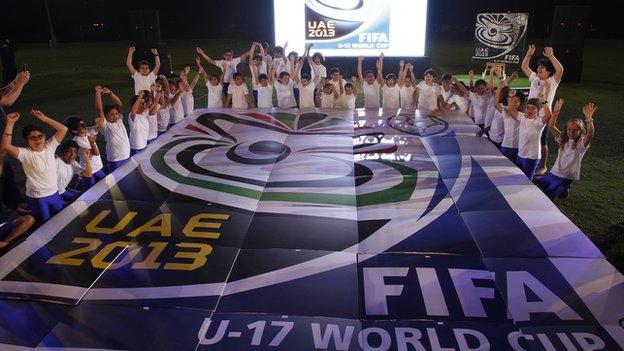 Nigeria Under-17 coach Manu Garba has dismissed Iran's accusation of age-cheating in the 4-1 defeat by the Golden Eaglets at the Fifa Under-17 World Cup in the United Arab Emirates.

Three-time champions Nigeria were too hot for Iran at the Khalifa Bin Zayed Stadium in Al Ain racking up three goals in the first half en route to a 4-1 win against the Asian side in the Round of 16.

Afterwards Iranian coach Ali Doustimehr questioned the ages of some of the players representing the west African country.

But Garba told BBC Sport: "I personally feel it is just something that is borne out of frustration at losing to a tactically and technically better side.

"All the players we have here passed the MRI test and we even conducted another round one month before we came to the UAE.

"We would probably take it up with the Iranian coach at Fifa level for casting aspersion on the eligibility of our players."

Back in August, Nigeria dropped key players for the tournament after wrist scans showed them to be over the age limit.

Magnetic Resonance Imaging (MRI) was used to scan the wrist plate of players to accurately ascertain their true age, with only players between grade 1 and 5 of the scan eligible to participate.

Meanwhile, Nigeria and Ivory Coast are the only African teams to have progressed to the quarter-finals in the UAE.

While the Young Elephants narrowly edged past continental rivals Morocco 2-1, Nigeria highlighted their title credentials with that crushing victory over Iran, bringing their goals-for tally to 18 after four games.

Ivory Coast will face Argentina in the last eight on Saturday, while Nigeria are sweating on the fitness of leading scorer Kelechi Iheanacho for their tie against Uruguay on the same day.

Iheanacho has scored five goals in the competition and coach Manu Garba has assured the striker will be available for the Uruguay test.

"It is a minor injury and Iheanacho should be back for the next game," the coach said.

Nigeria have now reached at least the quarter-finals at nine of the ten U-17 World Cups they have participated in.

The only time the Golden Eaglets failed to do so was at Finland 2003, when they were packing for home after the group stage.