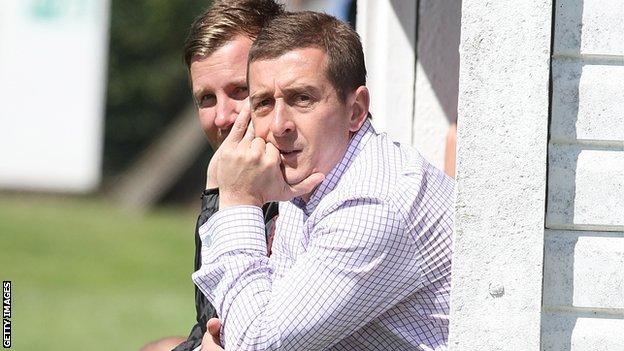 Brackley Town boss Jon Brady has said his side have the attributes to cause an FA Cup upset against Gillingham.

The Saints beat fellow Conference North team Barrow in Tuesday's replay to set up the first round tie in Kent.

"We've got all the ingredients within our squad to do something special," Brady told BBC Radio Northampton.

"Who knows? The FA Cup always throws up funny results and you never know, hopefully we can be one of those results that people are surprised by."

It is only the second time that Brackley have reached the first round, repeating their feat of 2008, when they were knocked out by Eastwood Town.

But last season's required extra-time to get past Barrow, with Izak Reid's penalty proving the difference, but not before Saints keeper Billy Turley had to save a late spot-kick from Sam Sheridan.

"I've never done this before but I didn't watch the penalty. I put my hands over my eyes and crouched on the floor," said Brady.

"All I did was hear my physio scream 'yes! yes!'. I'm yet to watch the DVD but from what I hear it was an unbelievable save."