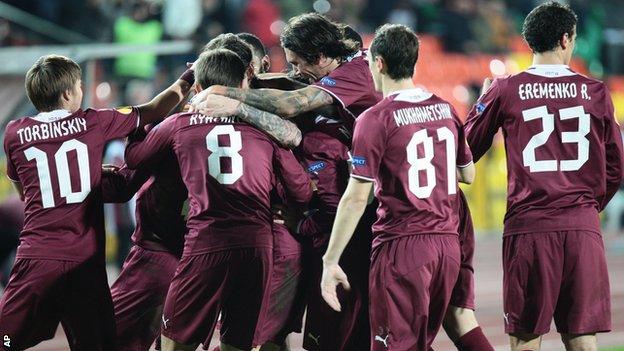 Kuzmin fired home a low effort in the first-half after a long ball over the top caught the Wigan defence out.

Grant Holt then headed over for Owen Coyle's side before substitute Nick Powell shot just wide after the break.

Wigan continued to push for an equaliser but Thomas Rogne's late header came back off the bar.

Despite their first Europa League defeat, Wigan's hopes of progressing to the knockout stages remain in their own hands with a home tie against Belgium side Zulte Waregem and a visit to Slovenia to face Maribor to come.

This was always going to be a tough ask for the Championship outfit against a side who have not lost in Kazan in 22 European games. But they will feel frustrated as one lapse of concentration cost them a valuable point.

After a scrappy start, Aleksandr Ryazantsev should have put Kazan in front, but he completely mishit the ball from just eight yards out.

Wigan did not heed the warning, though, and when winger James McClean switched off it allowed Kuzmin the space to break in behind the defence and score the opener.

The visitors, who held Kazan to a 1-1 draw at the DW Stadium a fortnight ago, started to edge their way into the game and their Russian hosts seemed hesitant when the Championship side delivered high balls into the area.

That tactic should have brought Wigan an equaliser after the half hour mark when Roger Espinoza delivered a superb cross-field pass that found Holt free, but the former Norwich striker headed well over from 12 yards despite having time and space to control ball.

Kurban Berdyev's side seemed content with their slender advantage and only threatened the visitors with the odd counter attack.

Powell, who scored the equaliser in the reverse fixture, came on after the break and the on-loan Manchester United forward went close with a long-range effort with 22 minutes to go after losing two Kazan defenders with ease.

Espinoza then delivered a superb cross that Rogne rose well to meet, but his header came off the bar before McClean's late flick from Stephen Crainey's corner went agonisingly close.

"I think at the outset, everybody felt - and rightly so - that Rubin would be the favourites to win the group.

"But with what we have shown in the two games, home and away against Rubin, we are confident going into our last two group games.

"We have the quality to progress from the group.

"We have to keep putting in performances like tonight and if we do that it will see us earn enough points to qualify for the knockout stages.

"On another day it would have resulted in not even a draw but a win for us.

"There are a lot of positives and is a lot to be pleased about."