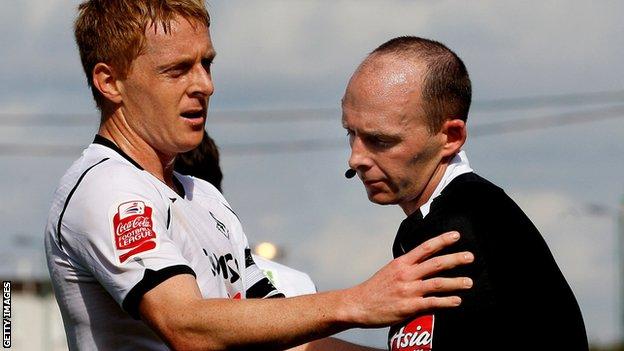 Swansea City chairman Huw Jenkins admits he is surprised Mike Dean has been chosen to referee for Sunday's south Wales derby against Cardiff.

Dean was struck on the head by a coin thrown from the crowd in the 2-2 draw between the clubs in the Championship in 2009.

But Jenkins believes both clubs have moved on in the four years since that game at Ninian Park.

"I suppose you could say there is a surprise," Jenkins said.

"It's an interesting one. I had to be told that was the case because I didn't remember."

Dean was struck on the head by a coin during a game in which he awarded a late Cardiff penalty which Ross McCormack converted to earn a draw.

A man from Pontypridd was banned for three years and fined £200 after being convicted of throwing the coin but Cardiff City escaped punishment.

Cardiff left Ninian Park at the end of that season and after moving to the Cardiff Stadium have since joined Swansea City in the Premier League.

While both sets of fans want to win the game and get three points, it's not going to have much bearing on the outcome come the end of the season

"Back [at] the old Vetch and the old Ninian Park, I think the atmospheres were different then.

"Things have changed dramatically on and off the field for both clubs.

"I just hope on the weekend the best team wins and there's no link to a refereeing decision for either side."

Sunday's match at the Cardiff City Stadium is the first time the clubs have played each other in English football's top division.

Jenkins fully understands the rivalry between the two clubs and what victory will mean to both sets of fans.

"There's no doubt everybody's fully aware of what this game is," Jenkins added.

"When you are in the Premier League every game is big, week in week out.

"You've got to make sure ultimately you get enough points come the end of the season to make sure you're in the Premier League the following season.

"While both sets of fans want to win the game and get three points, it's not going to have much bearing on the outcome come the end of the season."