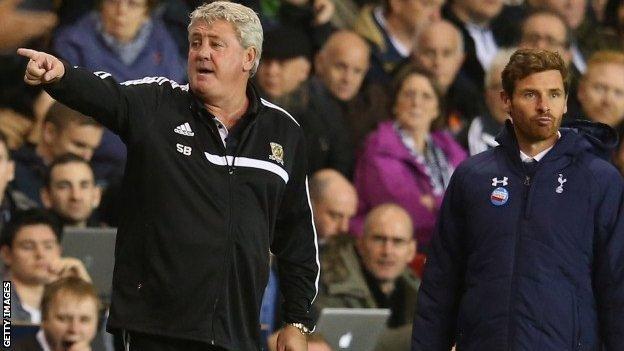 Hull boss Steve Bruce has been fined £10,000 by the Football Association for his complaints over Tottenham's decisive penalty in last month's 1-0 Premier League defeat.

Referee Michael Oliver awarded an 80th-minute spot-kick for a handball by Ahmed Elmohamady, which was converted by Spurs striker Roberto Soldado.

Bruce chose not to contest a charge of improper conduct when, as manager of Sunderland, he described Andre Marriner's decision to send defender Michael Turner off as "a joke" in January 2010.

"It's a joke decision," Bruce said after the game at White Hart Lane.

The Tigers boss has also been warned over his future conduct.

The FA said in a statement: "The charge, which Bruce admitted, was that his comments made after Hull's match at Tottenham Hotspur on 27 October 2013 called into question the integrity of the match referee, and/or implied that the match referee was motivated by bias; and/or brought the game into disrepute."

Hull, promoted from the Championship at the end of last season, are 10th in the Premier League with 14 points from their first 10 matches.

Bruce's side travel to Southampton on Saturday.