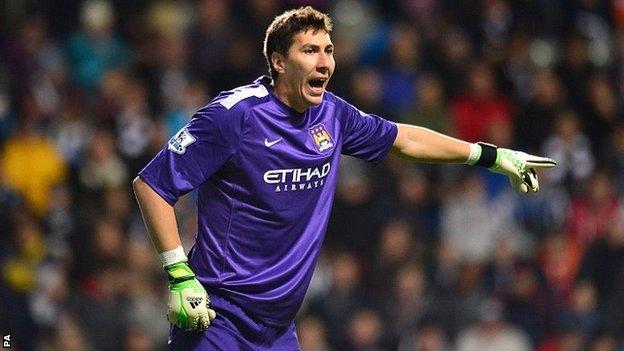 Pantilimon made two fine saves as City won the Capital One Cup tie 2-0 - their first clean sheet in seven games.

Joe Hart is City's first-choice keeper but England's number one has made a number of errors this season.

"Whichever keeper plays will have my support," said Pellegrini.

"Costel normally plays in the League Cup and FA Cup so it was an important game for him."

Pressed for further details about Hart's status, Pellegrini responded: "I have just told you I will think about that on Thursday."

Romanian Pantilimon was expected to come into the side for the League Cup tie at St James' Park, having played in the previous round.

But the 26-year-old did his cause no harm with a fine stop to deny Shola Ameobi in the first half and another to thwart Papiss Cisse in extra time.

That provided the platform for late goals from Alvaro Negredo and Edin Dzeko to seal a quarter-final tie against Leicester and it will give Pellegrini added confidence that his number two keeper could step in if needed.

Hart has been criticised after several high-profile errors, most notably in City's game against Bayern Munich in the Champions League earlier in October and in England's victory over Scotland at Wembley in August.

The Chilean boss said of Pantilimon: "He always has my trust and the trust of all the team - that is why he is here.

"He is a good player and is not playing too much because Hart played this year and last year but I trust him and for him and for the whole team to keep a clean sheet after six games is very important."

Scorer Dzeko added: "He was great. He is working hard in training. This is the second game in the League Cup where he didn't concede goals so he is definitely improving."