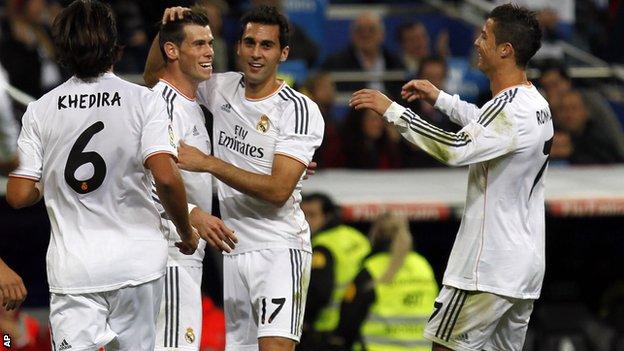 Real Madrid coach Carlo Ancelotti was pleased with Gareth Bale's performance after the Wales forward scored twice in his first home start for the club.

Bale also set up goals for Cristiano Ronaldo and Karim Benzema to help Real to an emphatic 7-3 win over Sevilla in La Liga at the Bernabeu.

The 24-year-old also played 90 minutes for the first time since his world record move from Tottenham in August.

The start to Bale's Real career following his £85m transfer has been hampered by foot and thigh injuries which have restricted his playing time.

However his display against Sevilla, who had Stephane Mbia sent off, went some way to make amends for his low-key performance in Real's 2-1 El Clasico defeat by Barcelona.

"It takes time to adapt but it was a necessity," added Ancelotti. "Now he doesn't have problems physically and he is improving his confidence, so he will be very important for us in the future."

Bale's goals, a 15-yard strike and deflected free-kick, came in the first 27 minutes, and he also provided two assists as Ronaldo scored a hat-trick while Benzema grabbed Real's other two goals.

"I showed what I was capable of," said Bale. "It was a crazy game to be involved in but the most important thing for us is to get the three points."

Real are six points behind leaders Barcelona after the win and two adrift of second-placed Atletico Madrid.