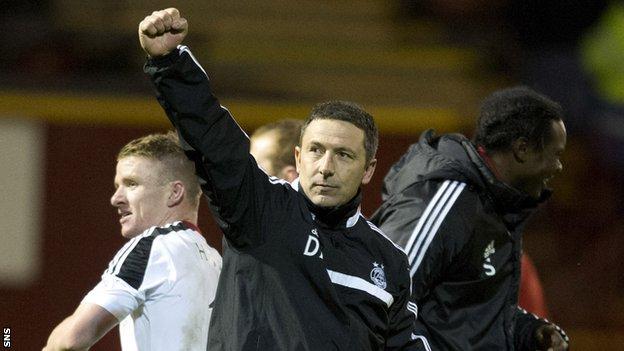 Derek McInnes praised his Aberdeen side following their League Cup win at Motherwell despite it being "stacked against them".

Andrew Considine and Jonny Hayes netted for the Dons in the 2-0 win, who had Joe Shaughnessy sent off after 12 minutes.

"It was gutsy," McInnes said. "It was real determination.

"A bunch of boys determined not to take anything other than us going into the semi-final."

For all the ball that Motherwell had, Jamie Langfield's only had one save to make

Aberdeen will be in the hat along with Inverness, Hearts and St Johnstone for Thursday's draw.

More than 2,600 Aberdeen fans made the trip to Fir Park hoping to see their side secure a place in the last four.

Right-back Shaughnessy was rightly sent off, according to McInnes, for a late lunge on Zaine Francis-Angol.

"For long spells it didn't look like anyone from Aberdeen would be at that draw tomorrow," McInnes said.

"To go so long with 10 men was always a concern.

"They got their head on every ball that came in.

"We had to play Jonny Hayes and Peter Pawlett as wing-backs which you would never envisage before the game but they did really well."

McInnes's side now hope to end a trophy drought that dates back to 1995 when the Dons won the League Cup.

This is the first time Aberdeen have won on consecutive trips to Fir Park since the 2006-07 season, having already won there in the league in August.

"We had to show courage, energy and good ability," said McInnes.

"We did that well enough to get over the line. We always felt it would possibly take a set play to win it for us. And what a set play - what a header from big Andy [Considine].

"For all the ball that Motherwell had, Jamie Langfield's only had one save to make."