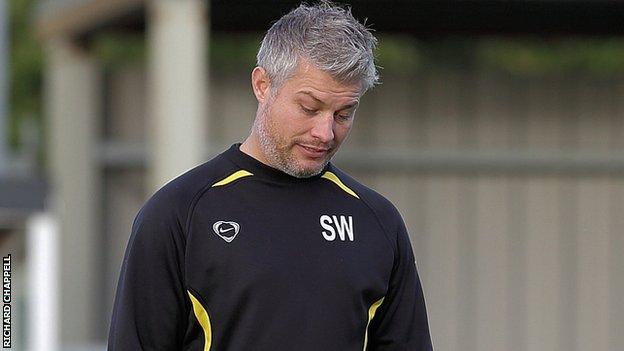 A non-league manager has been sacked after his side lost 9-0 while he was on his surprise 40th birthday holiday.

The wife of Chippenham boss Steve Winter had arranged with the club for him to take leave during the season and they are currently holidaying in Egypt.

But after Tuesday's heavy defeat at home to Stourbridge, Winter was relieved of his duties over the phone.

The club are fourth bottom in the Southern League Premier Division and have won once in seven league games.

Chippenham are now looking for their third manager of the season.

Nathan Rudge stepped down for personal reasons two games in to the campaign.

Steve Winter took temporary charge before being given the permanent job last month. He has now been sacked after 14 games.

His assistant Adam Tudor, who was in charge of the first team on Tuesday, has also left the club.

"I spoke to Steve last night so he was aware of what went on at the game and what happened [at a board meeting]. He was a complete gentleman as I expected him to be," chairman Neil Blackmore told BBC Wiltshire.

"He said he understood where I was coming from and what the board had to do. He's accepted the decision.

"We felt we had to do what was right for the club but it was made so much harder because I really do like Steve."

Chippenham played for 60 minutes with nine men against Stourbridge, after Greg Tindle and Iain Harvey were sent off.

The visitors cruised to victory thanks to five goals from Ryan Rowe and two each from Sean Geddes and Luke Benbow.

It could have been worse for Chippenham had keeper Ben John not saved a Geddes penalty at 3-0.