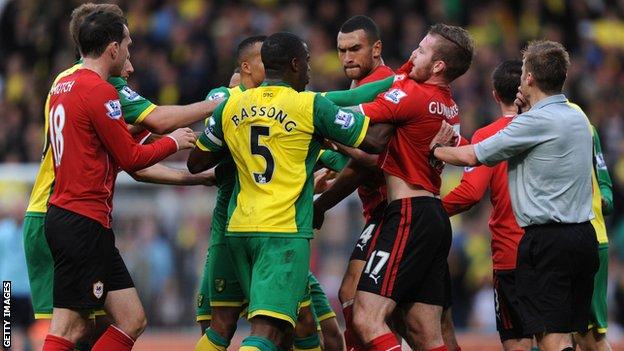 Norwich and Cardiff have been charged by the Football Association for a confrontation between some of their players during Saturday's 0-0 draw.

The teams have been accused of failing to ensure their players conducted themselves in an orderly fashion.

The scuffle in added-on time came after Canaries midfielder Leroy Fer attempted to score from a throw-in when Cardiff had put the ball out for an injury.

Both clubs have until 18:00 GMT on 4 November to respond to the charge.

The incident occurred after Cardiff had kicked the ball out of play to allow Norwich's Alex Tettey to receive treatment.

Rather than play the ball back to visiting keeper David Marshall, Netherlands international Fer rolled the ball into an empty net - something he later admitted was intentional.

Referee Michael Jones disallowed the goal, saying he had not restarted play, but Cardiff's players reacted angrily to Fer's decision.