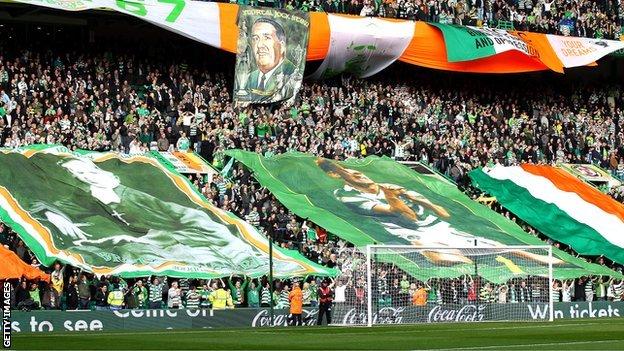 Any request by Celtic to play one of their home Champions League fixtures in either England or Ireland next season will be denied by European governing body Uefa.

If Celtic win the Scottish league title this season they will be required to play a two-legged Champions League qualifying match next summer.

But with Celtic Park, along with Ibrox and Hampden, all in use as Commonwealth Games venues, a new location for the game would need to be found.

Celtic's chief executive Peter Lawwell had asked Uefa to look at options for the tie, including stadiums outside Scotland.

Speaking earlier this week Lawwell said: "We are currently in discussion with Uefa in terms of what options we have.

"Once they are happy with those options then we will go and speak to the relevant owners of the stadia, possibly outside Scotland.

"It could be England or Ireland, the Aviva in Dublin or Croke Park or maybe even down south at a northern Premier League club. We have a big support in Dublin and the stadium was full when we played Liverpool in the summer there, so that would be great."

But BBC Sport have been told that Uefa, under its current rules, would deny any request to play the game outside Scotland, citing rule 12.7 of Champions League regulations.

It states Champions League matches must be played "either at the ground of the home club or at another ground in the same or another city within the territory of its association".

The only exemptions under the rule are for safety issues or as the result of a disciplinary measure.

Celtic are citing their European Cup Winners Cup game at Old Trafford in 1984 against Rapid Vienna as a potential precedent for moving the game.

But that match was only played at Manchester United's stadium after Uefa ordered a replay at a neutral ground at least 100 miles away from Glasgow following a controversial end to the second-leg at Celtic Park.

The club are also thought to be considering the 67,800 capacity Murrayfield stadium in Edinburgh, the home of Scottish rugby, with Uefa's regulations now making it the leading contender to host the potential game.