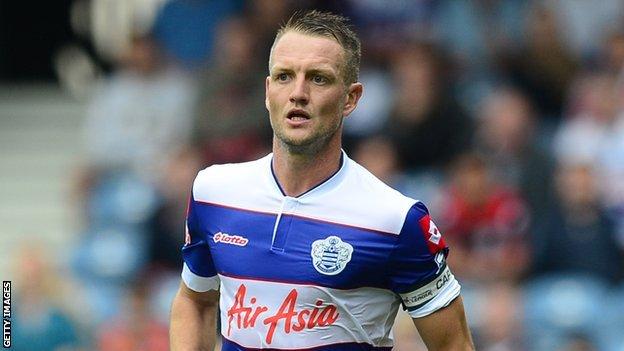 QPR defender Clint Hill has said the clean sheet in the goalless draw at Wigan will boost his side's confidence.

After going a club-record eight league games without conceding, the R's let in two goals at both Millwall and Burnley.

Hill told BBC London 94.9: "It was just nice to get back to a clean sheet. It was a good solid point.

"We conceded four in the last two games so it's nice to get that solid platform back. Hopefully that will breed a bit more confidence in us."

The 2-0 defeat at Burnley on Saturday was the west London side's first Championship defeat of the season.

QPR have the best defensive record in the Championship, having conceded just six times in 13 games.

Harry Redknapp's side went a club-record eight league games without conceding before that run came to an end in the 2-2 draw at Millwall.

However the R's have scored the least goals of any side in the top half of the table, finding the net just 14 times.

Hill was pleased with the team's response at Wigan after losing their unbeaten record.

"You don't want to dwell on it but we know we were pretty poor on the day at Burnley," he said.

"It was nice to have a game against Wigan and get a point on the road. It closes the gap a bit more [to league leaders Burnley].

"Hopefully we can start nicking some goals here and there."

QPR manager Harry Redknapp felt his side "looked solid" at the DW Stadium.

"I thought we dominated the game in the first half and played all the football but didn't get the goal our game deserved," he said.

"It was a good away performance. We kept the ball better than we did at Burnley.

It's been a great start for us. It will be tight until the end of the season and we will be up there somewhere

"We are getting better as we go on and are starting to play more football, which is important. We have been doing that in the last four or five weeks."

Rangers are third in the table, four points behind Burnley.

The Loftus Road outfit have the best defensive record in the division, having conceded six goals, but have scored only 14 - the least of any side in the top half of the table.

Redknapp is confident his side can continue to challenge for an immediate return to the Premier League.

"I can't ask any more of the players. It's been a great start for us.

"It will be tight until the end of the season and we will be up there somewhere. There are about eight or nine teams who have a chance."