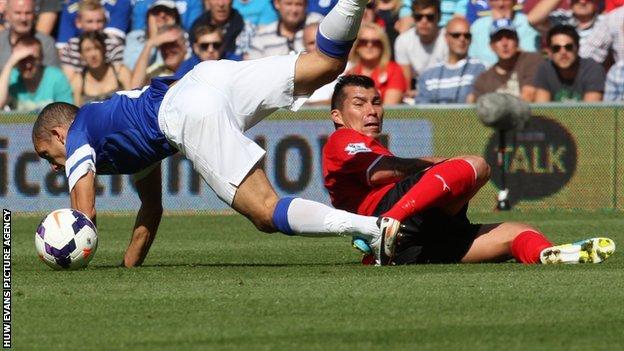 The Bluebirds broke their transfer record to sign the Chile midfielder for £11m from Sevilla in August.

The two clubs meet on Sunday at Cardiff City Stadium in the first all-Welsh Premier League derby between the two.

"I think they [Cardiff] paid too much money for him [Medel] because he's a holding midfielder, he's not a goal-scorer," said full-back Rangel.

"He's a hard-working player, he's a holding midfielder. He's aggressive, we know that, and he likes the contact with other players."

One of Rangel's fellow Spaniards at Swansea, Jose Canas, memorably tangled with Medel last season in the Spanish Primera Liga.

Medel was red-carded after slapping Canas, then with Real Betis, in a heated Andalusian derby and Rangel believes that shows the Chilean could again overreact on Sunday.

"He's had an experience with Canas before and got sent off," Rangel added.

"That shows you that in these kind of games there is a lot of craziness and intensity and if you are clever enough you can get him sent off, but he's only one player.

"Cardiff have been doing great, I think we have as well, so hopefully it's going to be a healthy derby - but I doubt it."

The Bluebirds are Premier League newcomers while Swansea are in their third season in the top flight after promotion in 2011.

The sides last met during the 2010-11 season, with Swansea winning 1-0 at Cardiff and the Bluebirds victorious by the same scoreline in the return at the Liberty Stadium.

Cardiff are 16th in the Premier League, two points behind ninth-placed Swansea.