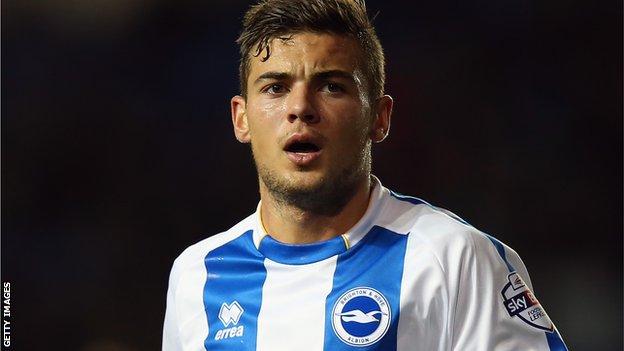 Brighton's Jake Forster-Caskey says he is gaining experience from the other midfielders at the Amex Stadium.

The 19-year-old has made nine appearances for Albion this season, his most in any campaign for the club.

He told BBC Sussex: "It's really good for me to have a player like Keith Andrews, who has played in the Premier League and internationally.

"I look at Liam Bridcutt as an experienced player now and there are a lot of good people I can look up to."

He added: "I can learn a lot off people like that and off Crofty [Andrew Crofts] as well."

Forster-Caskey came through Brighton's youth academy and made his first-team debut in May 2010 at the age of 16.

We are changing with a different manager and it is going to take time to settle in. Once the squad is back fit and firing we will contend with anyone in this league

After several appearances in January 2012, which saw him score against Southampton and Wrexham, he spent the first half of last season on loan at League Two side Oxford United.

With Oscar Garcia replacing Gus Poyet as head coach this summer, the former England Under-17 international has had more occasions to impress this season despite competition for places in Brighton's midfield.

"I think most squads these days have a lot of midfielders as it is obviously the engine room," Forster-Caskey said.

"That's where the most players are going to be.

"I picked up a niggly injury which didn't help. I am still young so I am putting my head down and working hard.

"It seems like I have played against some really tough opposition this seasons, with QPR, Reading and Watford to name a few."

Brighton, who reached the play-off semi-finals last season, are currently lying 16th in the Championship table.

Along with having to adapt to Garcia's playing style, the Seagulls have been hit with a series of injuries this season and Forster-Caskey has backed the side to climb the table.

"We are improving even though results at the moment don't seem to be quite going our way," he added.

"We play more of a high-tempo game and try and press the opposition further up the pitch. We still pass the ball and play the ball nicely but are just a bit more direct.

"We are changing with a different manager and it is going to take time to settle in. It is time to push on now and look up the table.

"Once the squad is back fit and firing we will contend with anyone in this league."