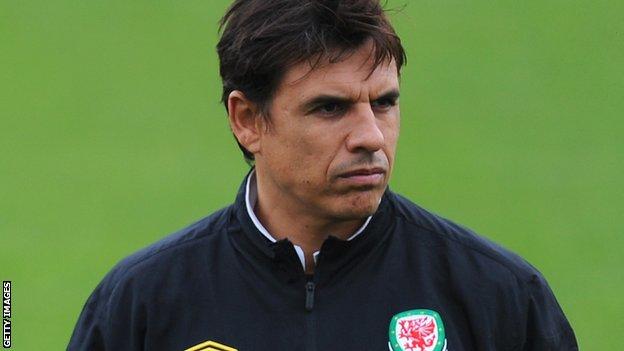 Wales midfielder Joe Ledley wants Chris Coleman to continue in his role as manager of the national team.

Coleman, 43, whose contract expires in November, has been linked with the vacant managerial position at his former club Crystal Palace.

He spent four seasons as a player at Selhurst Park and reports suggest he is set to hold talks with the London club.

Palace, who are bottom of the Premier League, are looking for a new manager following the departure of Ian Holloway.

And Ledley told BBC Radio Wales Sport that he was not surprised that Coleman had been linked with the role despite failing to guide Wales to the 2014 World Cup in Rio.

"He's done a good job [for Wales]," he said. "It took a while but [it was] a fantastic end to the [qualifying] group.

"That's what we need to qualify - everyone to turn up and play for their country. We all get on and that's the main thing to get this country [going] forward."

Coleman, who has also managed Fulham and Coventry, has previously said he is undecided about whether he wanted to continue in the role which he took on in January 2012 following the death of Gary Speed.

His contract comes to an end following the friendly against Finland on 16 November in Cardiff and the Football Association of Wales has been in ongoing contract talks with Coleman over the last few months.

Wales ended a disappointing World Cup campaign with a 1-0 victory over Macedonia and a 1-1 draw away to Belgium in October.