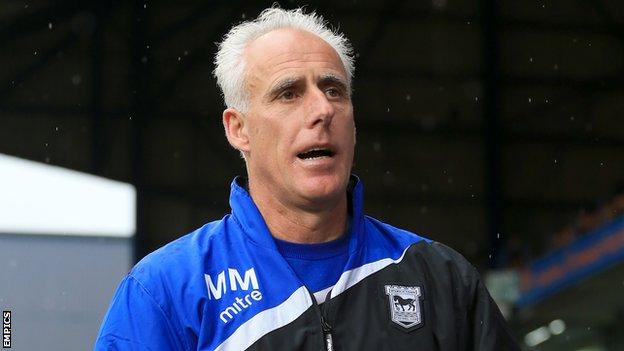 Ipswich Town have said they have received no approach from the Republic of Ireland for manager Mick McCarthy.

McCarthy is second-favourite with bookmakers, behind Martin O'Neill, to replace Giovanni Trapattoni, who

"We've had no approach - the owner, us at the club, nor Mick," Town managing director Ian Milne told BBC Look East.

"It's very much a 'what if' situation and we can't deal with what ifs. We'll worry about that if it happens."

McCarthy, a former Republic of Ireland defender, managed the nation at the 2002 World Cup but has refused to be drawn on speculation linking him with a return to the position.

At his media conference this week, he told journalists they were "bonkers" for continuing to ask about his future.

McCarthy has reached a year in charge at Portman Road, in which time he has prevented the Suffolk club from suffering Championship relegation and his side now sit seven points off the play-off places.

"The first part of the job was successful - keeping the club in the Championship," said the 54-year-old, who faces Barnsley - a team he made over 200 appearances for as a player - on Friday.

"I'm delighted with the players I got in this season. We've done alright but we could be better off. I don't think we've nicked a point yet."

Milne added: "He's brought stability to the squad, the training ground and the club as a whole.

"He's a disciplinarian. I am told if things don't go well for the team or certain players, he tells them so, but then that's finished.

"He's brought a whole new style of management and a new culture and confidence."