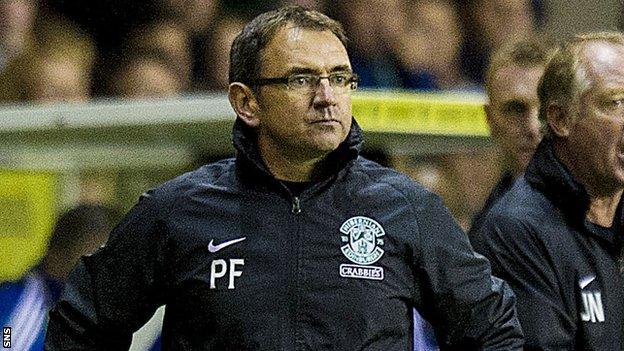 As the Hibs fans trudged out of Easter Road, trying to find the words to explain a devastating derby defeat in the League Cup quarter-finals, I think we can safely assume 'magnificent' wasn't one of them.

It was, however, the word of choice for Pat Fenlon, in the first answer of his last post-match television interview as Hibs manager.

He was talking about his team's first half performance but I still found it an incredibly strange reaction at the end of a hugely disappointing night for Hibs.

Yes, they blasted out of the blocks in impressive fashion and dominated the first half hour against a young Hearts team doing a decent impression of rabbits caught in headlights.

And Hibs were unlucky. Paul Hanlon's early header could just as easily have found the net as come back off the base of the post and Hearts keeper Jamie MacDonald produced a wonder save to stop Scott Robertson scoring.

The home team suffered a stunner of a sucker punch in the 34th minute. Ryan Stevenson wasn't expected to be on the Hearts team-sheet and there wasn't any great expectation about an opening goal as the ball came his way, with his back to goal 25 yards out.

He simply wheeled and hooked an unstoppable shot past Hibs keeper Ben Williams to give the derby a surreal scoreline.

If Stevenson has any tattoo space available he should probably be adding the Superman logo to his collection. Not just the goal, but what a shift he put in on the back of a knee scan which had threatened to keep him out of the game.

The fact remains, though, Hibs had an hour, including stoppage time, to respond to that Hearts goal.

And what an incentive. Not just derby victory against the team they love to hate but the prospect of landing some silverware with Celtic already out of the League Cup.

Fenlon's team should have scored in the second half. It was a golden opportunity for Liam Craig right in front of goal.

But that was it. In more than 60 minutes of football after the Hearts goal, Hibs summoned up only one serious attempt at taking the tie into extra time.

That's the biggest condemnation of Hibs' performance. They went down in the derby, having started so well, with barely a whimper.

And they were playing a team which, apart from a couple of penalty shootout victories, hadn't won a game since August.

A team fifteen points adrift at the foot of the Scottish Premiership and including only three players over the age of 21.

Of the three matches Hearts have won inside 90 minutes this season, two of them have come against their capital rivals.

A double derby letdown on the back of their European embarrassment against Malmo confirmed for the Hibs supporters that Fenlon's time was up.

A couple of hundred fans voiced their protest after the League Cup defeat - their after-match reaction couldn't have been in any sharper contrast to Fenlon's talking-up tactics.

What happened next was inevitable; Pat Fenlon jumped before he was pushed; his two years in charge have taken Hibs down the road to nowhere.

The club could do without that revolving door to the manager's office spinning again. There have been too many changes, but this one's been coming for a long time.